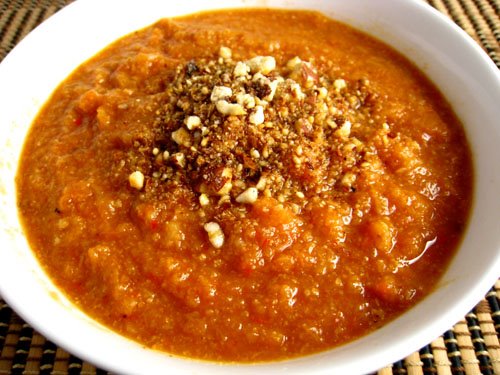 Recently I have really been enjoying simple vegetable soups. I am still surprised by how such simple recipes can make such great soups. Many vegetable soups only have a few ingredients and yet they are so tasty. A while ago I came across this recipe for roasted cauliflower and red pepper soup . I really like roasted vegetables as roasting them adds a lot of flavour. Roasted red peppers are among my favorite roasted vegetables and I just had to try a roasted red pepper soup. I had also been wanting to try roasting cauliflower so I roasted the cauliflower as well. This soup was super simple to make though it took a bit of time roasting and simmering. It turned out really tasty! The roasted red pepper was the star flavour and the cauliflower contributed a really nice texture and thickness to the soup. There are a lot of things that you can garnish a vegetable soup with including sour cream, fresh chopped herbs, pestos, etc. I garnished mine with a bit of sour cream the first time and some dukkah the second time. The dukkah was really good as a garnish for the soup. It added a bit of spice and heat and a nice contrasting crunchy texture.