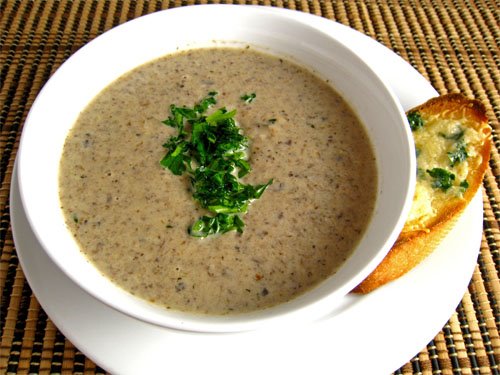 With this months No Croutons Required theme being mushrooms I went a little overboard and got way too many mushroom. Having extra mushrooms is not something that I consider to be a problem. In fact I had been wanting to try making a cream of mushroom soup for a while. I had a one pound package of wild mushrooms containing cremini, shiitake and oyster mushrooms that would be perfect for a cream of wild mushroom soup. When I made my oven roasted eggplant and mushroom miso soup I found out that roasting mushrooms adds a ton of flavour so I knew that I would have to roast the mushrooms for the cream of roasted wild mushroom soup. I immediately thought that I would have to use dill in the soup as dill is my favorite herb pairing with mushrooms, but I did not have any dill on hand… I did have some thyme and sage which I though would also go well. I used some homemade vegetable broth which added a lot of flavour. The soup came together easily and just as I was about to pour the cream into the soup I paused. I thought, I could replace the cream with miso and make this a roasted wild mushroom miso soup. I thought it over for a while and in the end I decided that I had started the mushroom soup because I wanted to try making a cream of mushroom soup. I can always try the mushroom miso soup some other time. The soup was so good! It was full of mushroom flavour and nice and creamy. I served the cream of mushroom soup with some cheesy garlic bread . I will definitely have to make this soup again though, next time I will use dill.