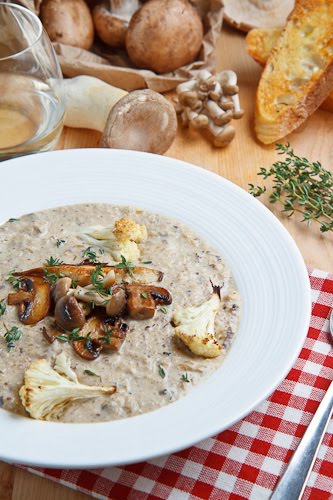 A creamy wild mushroom soup that is thickened with roasted cauliflower.

Ever since I made the roasted pumpkin, pancetta and sage soup a few days ago I have found myself thinking about soups more often. After avoiding soups during the hot summer days I am now free to make them whenever I want and that is good because I have a few ideas that I have been wanting to try! Up first was one for a cream mushroom and roasted cauliflower soup! Cauliflower works really well as a thickener in soups and I was thinking that I could use some to make one of my favourite soups, cream of mushroom soup , a bit heartier. 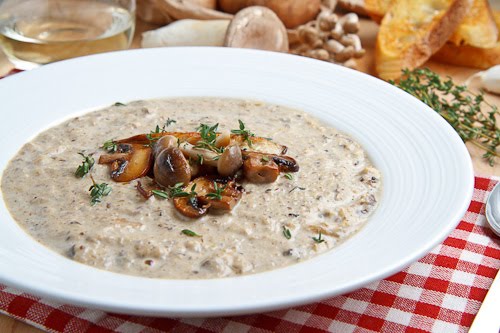 A few years ago I discovered that roasting vegetables very often makes them better and I have been roasting pretty much any vegetable that I can get my hands on ever since. Cauliflower is no exception to my theory and in fact it is one of the shining examples of it as roasted cauliflower is so addictively good! I could literally eat a bowl of roasted cauliflower just like a bowl of popcorn and I have often made it just to snack on. Using the flavour enhanced roasted cauliflower in soups is also amazing and I could not resist the opportunity to use it in this recipe. Although roasted mushrooms are also really good, I wanted to saute them and let them caramelize a bit to build up their flavour and then to deglaze the pan with some white wine to make sure that we get all of that caramelized mushroom flavour from the bottom of the pan. I finished the soup off with some garlic, leeks, thyme and a healthy dose of heavy cream to make sure that the soup was indeed creamy.
I really like how simple two ingredient soups very often turn out to be so insanely good and this creamy mushroom and roasted cauliflower soup is no exception! If you are a fan of mushrooms then this is definitely a soup for you! You can use pretty much any type of mushroom that you want and I like wild mushrooms and I tend to go with a base of cremini and then add in some shiitake, oyster and even shimeji mushrooms. I served this mushroom and cauliflower soup with garnished with even more sauteed mushrooms along with some garlic rubbed crostini. I also happened to have some pancetta and blue cheese on hand and I could not resist trying my second bowl garnished with them! The tangy blue cheese and salty, crispy fried pancetta went really well with the creamy mushroom soup and I highly recommend it.
Note: I like my soup nice and thick, but if you prefer a smoother soup you can use only a half a head of cauliflower instead of a full head. 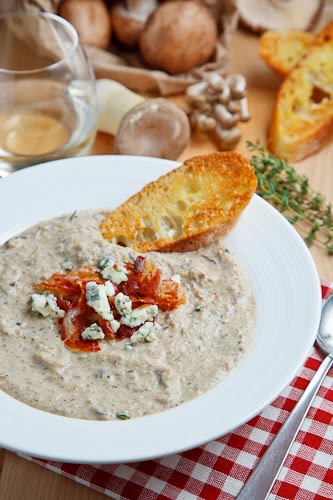 A creamy wild mushroom soup that is thickened with roasted cauliflower.