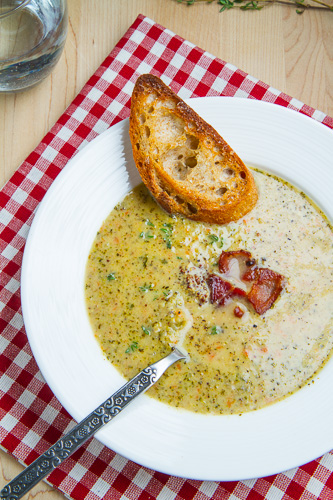 A creamy broccoli and cheddar soup with the concentrated flavour of roasted broccoli.

Despite the fact that it has been a little warmer out lately, I have still been craving soups and I recently realized that it had been a very long time since I last made one of my favourite soups, a broccoli and cheddar soup. The broccoli and cheddar flavour combination is a really good one that I never tire of reinventing in different dishes but this soup is one that I keep coming back to again and again. Since this soup is so simple it is a good idea to use quality ingredients including roasted broccoli, a nice homemade vegetable broth or chicken broth a nice quality aged cheddar. Roasting vegetables concentrates and brings out their flavours and the intensified broccoli flavours from the roasted broccoli goes beautifully well in this soup. This roasted broccoli and aged cheddar soup is super easy to make and yet it is so bursting with flavour that it is bound to satisfy! One last thing that I like to do with this soup is to add a tablespoon of grainy mustard which goes particularly nicely with the broccoli and cheddar flavour combination. 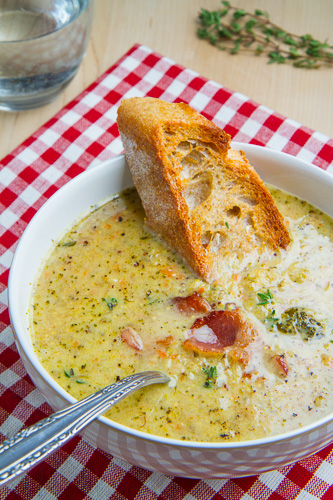 Serve garnished with bacon and grainy mustard to kick things up a bit. 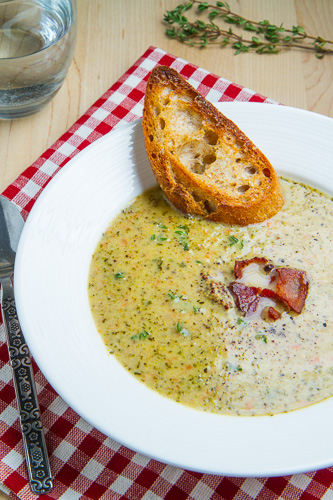 Make without the bacon for a really nice vegetarian soup! 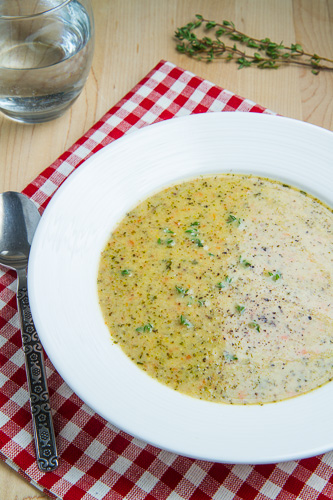 A creamy broccoli and cheddar soup with the concentrated flavour of roasted broccoli.

Slow Cooker: Implement step 1, optionally implement steps 2 & 3, place everything but the milk and cheese in the slow cooker and cook on low for 6-10 hours or on high for 2-4 hours before mixing in the milk and cheese, letting the cheese melt and then pureeing the soup.
Option: If you like a thicker, creamier and healthier soup use pureed white beans instead of the milk or cream.
Option: Start the soup out by cooking 4 strips of bacon, use the grease to cook the vegetables instead of the oil and serve the soup garnished with the crumbled bacon.
Option: Add diced ham.
Nutrition Facts: Calories 223, Fat 11.3g (Saturated 3.2g, Trans 0), Cholesterol 14mg, Sodium 389mg, Carbs 14.1g (Fiber 3.2g, Sugars 5.7g), Protein 16.8g
Nutrition by: