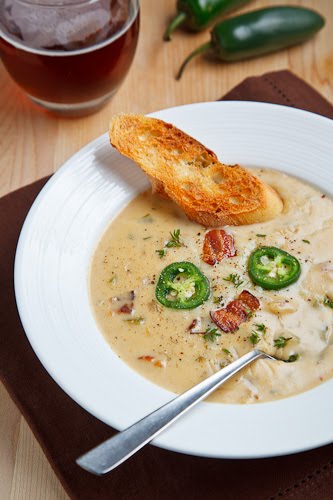 A heavenly ale and liquid melted cheddar soup seasoned with smoky bacon and spicy jalapeno pepper that is pure comfort in a bowl!

When I came across a recipe for an ale and cheddar soup recently on From and Away I immediately pinned it thinking that it would be perfect to make some time around St. Patrick’s Day. In addition to the ale and cheddar this soup contains plenty of bacon and spicy jalapenos peppers so there was really no way that I could resist making it! This recipe starts out by cooking the bacon, and I used a double smoked bacon to add a smokiness, and then uses the bacon grease to saute the onions, celery and jalapeno peppers so that you do not loose any of that bacon-y goodness. Next up is some garlic and thyme for flavour followed by some flour to thicken the soup before adding the ale and broth. With the soup containing both ale and cheese I added some mustard and Worcestershire sauce which always makes for a great flavour combo. The soup is of course finished off with plenty of cheddar cheese and some heavy cream.
Lets not even try to fool ourselves here, there is nothing at all healthy about this soup, but it is so so good! Can you just imagine drinking a warm liquid cheese ale with a mellow spicy heat and the hint of smoky bacon? I am already craving another bowl! 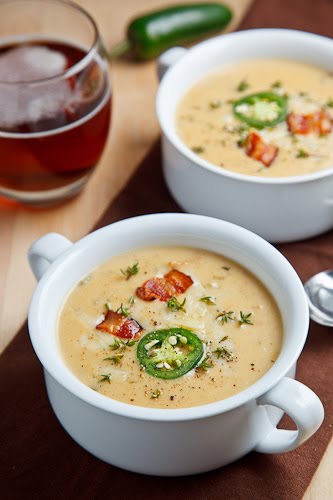 A heavenly ale and liquid melted cheddar soup seasoned with smoky bacon and spicy jalapeno pepper that is pure comfort in a bowl!