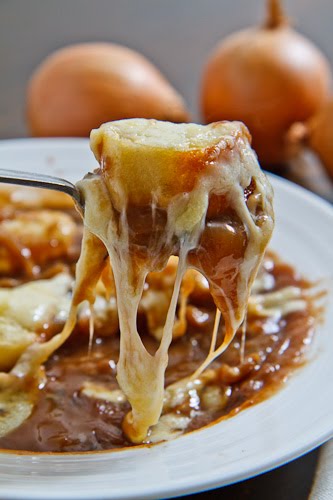 A decadent French onions soup with a beautiful depth of flavour that is topped with toast and melted cheese.

When I think about my favourite soups, French onion soup is definitely one of the first ones that comes to mind. Even though it is one of my favourites I don’t make it all that often as it requires a bit of time and effort to make. A French onion soup is basically a soup consisting of caramelized onions in a beef broth that is topped with a slice of bread and a bunch of cheese that is all melted and gooey and golden brown and good. How could you possibly go wrong with a sweet oniony broth topped with melted cheesy goodness?
The key to a great French onion soup is definitely the caramelized onions and caramelizing those onions is what takes all of the time and effort in this recipe. Now you can caramelize onions in about a half an hour but I think that slowly caramelizing them over a period of 3-5 hours on a low heat brings out much more of their amazing sweetness and flavour. Luckily, they do not require all that much attention while they caramelize and you simply need to stir them every 10 minutes or so. Because of this you can do something else, like checking out all of your favourite food blogs while you caramelize them. The long and easy caramelization process makes this soup a great candidate for a lazy Sunday night dish where you can spend all afternoon with those onions and fall and winter seem like the perfect time of year as you do not mind having the stove on all day as much.
After the onions are caramelized you add some flour and cook it a bit to caramelize it. This is essentially going to form a simple roux that will both thicken the soup and add flavour, so do not rush past cooking the flour a bit. Up next is the broth which is usually a beef based broth, but you could use any broth and I often like to add a bit of flavour by replacing some of the broth with red wine. The soup is flavoured simply with some garlic, thyme and bay leaves for some aromatics. The final step for the soup is to simmer it a bit to let the all of the flavours come out and mingle.
At this stage the soup is so good that you could eat it as is and it would be great but why stop there when you could top it with bread and cheese? This step is pretty simple and you just put a lightly toasted slice of bread on top followed by the cheese and throw it under the broiler until the cheese melts, bubbles and turns a nice golden brown. You are going to want to make sure that you use an oven safe bowl here and watch it carefully as the cheese can quickly burn under the broiler. Taking that extra step of adding the topping is well worth it as the combination of the salty cheese and the sweet onion soup is what takes this soup from simply being great to being amazing! 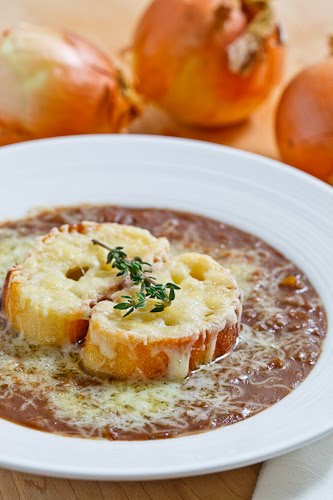 A decadent French onions soup with a beautiful depth of flavour that is topped with toast and melted cheese.