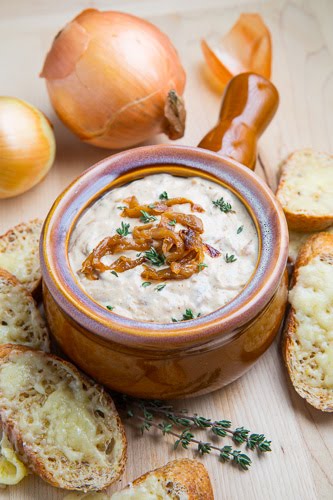 With the big game coming up I have been going over my parties menu and reviewing my favourite recipes including the hot caramelized onion dip which I wanted to add but I thought I would do something a little different this time. Although I am totally addicted to hot melted cheese dips, I wanted some variety so I decided to do a room temperature version inspired by the flavours of French onion soup. At the base of French onion soup is of course the caramelized onions and that means spending some time caramelizing the onions. To slowly caramelize the onions at a low temperature can take more than 3 hours but you can also do it at a higher temperature but it requires more hands on time as you have to stir the onions every couple of minutes. When you caramelize the onions at a higher temperature brown bits build up on the bottom of you pan and since you do not want them to burn it is a good idea to deglaze the pan frequently. Though I normally just use water to deglaze the pan this time I used wine and beef stock since they form the broth of French onion soup. Up next is a bit of garlic and thyme to finish off the onions. The base of the dip is made with sour cream and mayonnaise with a hit of lemon juice, Worcestershire sauce and gruyere for flavour. French onion soup is typically topped with toast, covered in cheese and then baked until the cheese is all melted and good and I incorporated that aspect into the French onion soup dip by serving it with crostini covered in melted gruyere. 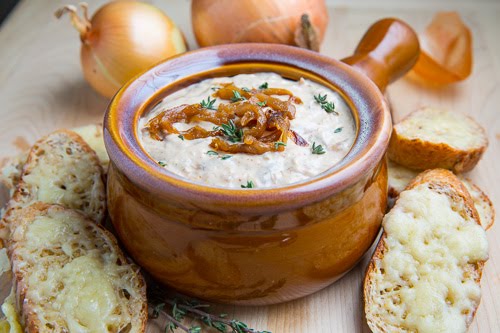 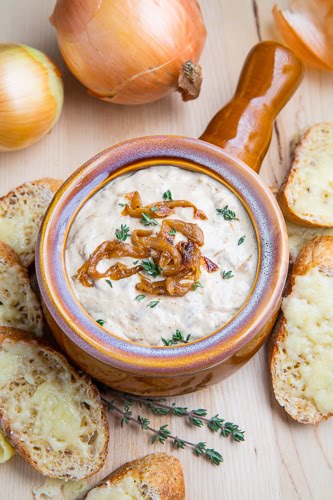 French onion soup could not get any better than this! 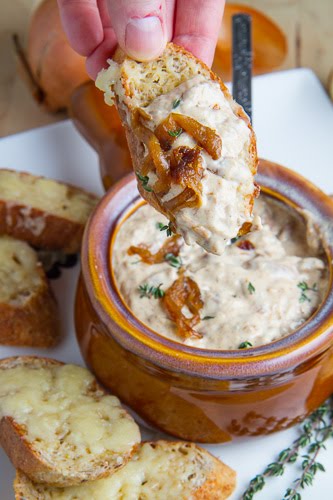