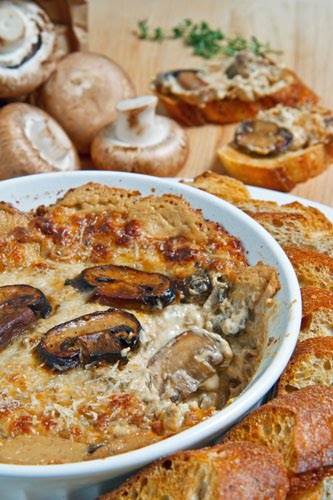 Mushrooms have to be one of my all time favorite foods which is why when Mushrooms Canada approached me about taking part in an international mushroom tournament, I jumped at the chance to take part! The name of the game is “Mushroom Masters: A Tournament of Taste” and the basic idea behind it is that food bloggers, in association with mushroom organizations, from Canada, the United States and Australia would develop and photograph new mushroom recipes to face off against each other once a week for the month of September, which is mushroom month. The photographs have been appearing on Taste Spotting for the show down for the last few weeks this week it was my turn to represent team Canada with a tasty new mushroom dish.

Luckily, I drew the wild card and I was allowed to use pretty much any commonly available mushroom. My biggest problem for this challenge however, was that I had too many ideas! When I sat down to brain storm, I ended up with over a dozen ideas within a few minutes. I was able to narrow the list down to six recipes which I ended up making all in one weekend and this hot cheesy mushroom dip was my favourite from among them.

I had been craving a hot cheesy dip for a while and the idea one infused with mushroomy goodness was too hard to resist. I started out by sauteing some mushrooms in butter along with some onions, garlic and thyme and I finished things of with a splash of wine. You could use pretty mush any mushroom you want in this dip and I went for my goto mushroom, the cremini mushroom to keep things nice and simple. I then pureed half of the mushrooms in a food processor to make sure that the mushroom flavour penetrated the entire dip and I left the other half of the mushrooms the way they were so that I could also enjoy their texture. From there I incorporated the mushrooms into a pretty standard hot cheesy dip base and baked the whole thing in the oven until it was nice and bubbling and golden brown.

I have to say that if you like mushrooms and you like hot cheesy dips then this is the dip for you! I was immediately hooked and the entire batch disappeared much quicker than it should have! I served the mushroom dip on toasty sliced baguette along with a glass of that white wine.

Take a look at this weeks Mushroom Masters: A Tournament of Taste contest on Taste Spotting and vote! 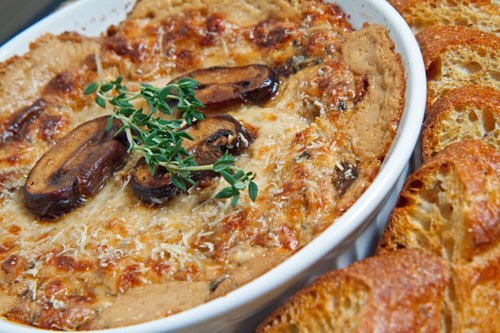 Disclaimer: I have received compensation from Mushrooms Canada for my recipe and photos.