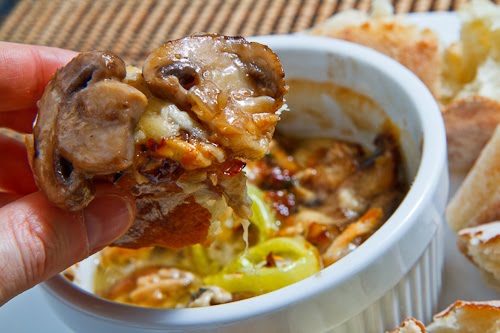 Mushrooms and cheese individually are two of my favorite foods and when they are combined together it always catches my attention. The other day I came across this magical combination in the form of this recipe for a mushroom bouyiourdi by Peter of Kalafagas that I just had to try. Not only did the dish contain both mushrooms and cheese but it was done in the form of a bouyiourdi which is more traditionally made of tomatoes, peppers and cheese. The bouyiourdi is baked until the cheese has melted and then it is served with crusty bread to be used for dipping and scooping up all of the melted cheese and tomatoy, or in this case, mushroomy goodness. I tweaked the recipe a bit replacing the cream with a bit of gorgonzola dolce, a blue cheese, both because I had it on hand and because it goes well with mushrooms. The mushroom version of the bouyiourdi was even better than the tomato version! You just can’t go wrong with mushrooms and melted cheese and when you have a dish that is pretty much just composed of the mushrooms and melted cheese it is so good! I really enjoyed the creaminess and tanginess that the gorgonzola added and the heat from the peppers was also a nice touch. I will definitely be making this again!