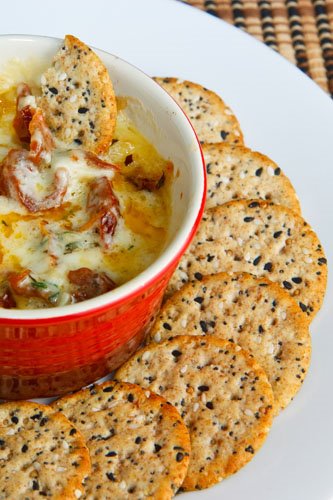 For a long time brie was not one of my favorite cheeses but that all changed when I tried baking it recently. The first time I tried it baked I baked it in puff pastry with some cranberry sauce. The melted ooey gooey brie took on a whole new and wonderful life and it was almost irresistible. I quickly followed that up with a baked brie with fig jam in golden brown puff pastry and I really enjoyed that as well. It had been working so well with on the sweet side that I had not even thought about trying the savoury side. Then I came across this recipe for a baked brie with sun dried tomatoes on White on Rice Couple and I knew that I just had to try it. Melted brie with flavourful sun dried tomatoes, garlic and thyme sounded like a great combination! I also liked that this version was not baked in pastry as it would be much easier to dip into or spread onto things like crostini. This recipe is really easy to follow though you should watch out for the amount of brie. By the time the rind has been removed and it has been baked there is not much melted brie left. I got one ramekin out of an 8 ounce brie. The baked brie with sun dried tomatoes and thyme was so good! It is hard to beat melted cheese and the sundried tomatoes added a ton of flavor. The thyme added a hint of earthiness that finished off the dip nicely. I served the baked brie dip with some whole grained crackers for dipping.