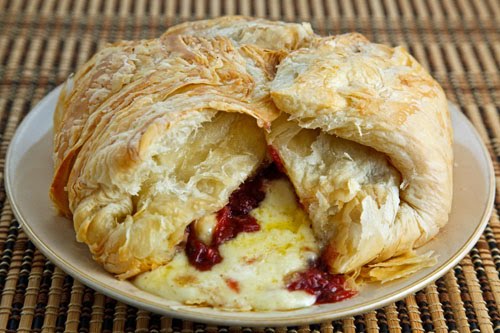 Brie is one of those cheeses that I always see around but I never seem to do anything with it. I recently came across the concept of a baked brie and the thought of that gooey melted cheese piqued my interest. Baked brie is basically just brie wrapped in puff pastry along with some preserves and baked in the oven until the pastry is golden brown and the cheese inside is nice and melted. Instead of using preserves in the baked brie I thought that it would be nice if it was a bit more seasonal and I used some cranberry sauce . For this version of the cranberry sauce I doubled the sugar to ensure that it was nice and sweet as well as tart to complement the savoury melted cheese. My baked brie did not turn out quite as I had hoped as the puff pastry did not hold together and it opened up while cooking. Despite the fact that it does not look the best, it sure was good! The brie cheese was completely melted and and went really well with the cranberry sauce. I served the baked brie with some crackers to dip into the melted cheese and cranberry sauce goodness. I have now been sold on brie and I really like it. I can’t wait to get some more.