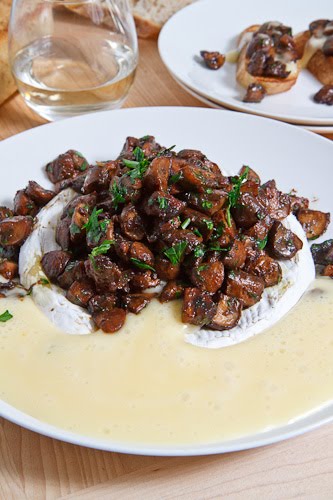 Although I can sometimes go all out with the holiday cookie baking, I try to not to forget about savoury treats which are always a welcome change. A couple of years ago I discovered a savoury baked brie with cranberry sauce that was so amazingly good and I have been hooked ever since. When I came across a recipe for baked brie topped with mushrooms on Mushrooms Canada there was no question as to what savoury appetizer I was going be making this year.
The idea is pretty simple; you saute and caramelize some mushrooms and onions, toss them on some brie and bake it until the cheese belts. To make things even easier on a busy day, you could cook the mushrooms the day before and then just bring them to room temperature before putting them on the brie and baking.
The baked brie topped with caramelized mushrooms was everything that I had been hoping for and then some! When I cut into the brie it came pouring out under the weight of the heaping pile of mushrooms on top of it. I served the baked brie and mushrooms with toasted baguette slices and scooped the mushrooms covered in melted gooey brie on top of them. 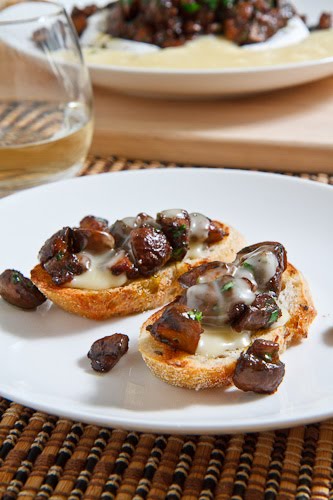