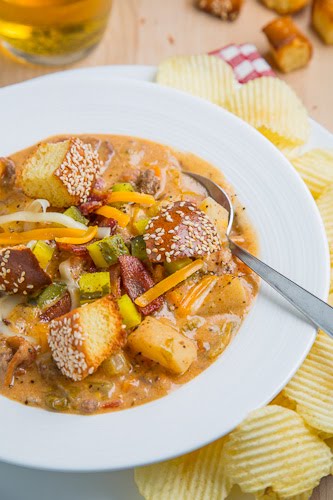 A tasty and hearty soup with all of the flavours of a bacon double cheeseburger.

Fall is officially here and as if on cue the cooler weather rolled in which is good because I can now get into all of those fall dishes that I have been holding off on like soups! This is quite a relief in that I have had the idea for this bacon double cheeseburger soup burning a hole in my mind pretty much all summer and I was just waiting for things to cool off a bit before making it. The idea for this soup is quite simple in that it contains all of the flavours of a bacon double cheese burger in soup form, and who doesn’t love a bacon double cheese burger?
This soup starts off with the base of any burger, the beef, and then moves on to the bacon and then the standard soup vegetable base of onions, celery and carrots which are sauteed in the bacon grease to maximize that smoky bacon flavour. A jalapeno pepper also joins the vegetable base to add a bit of spicy heat to the soup. I envisioned this soup as a thicker soup, more like a chowder, so I added some flour at this point which to thicken the soup as it cooks. You could of course use water for the liquid of any soup but why not take the opportunity to add flavour and I went with a cobination of beef broth and beer which was inspired by the recent success of the ale and cheddar soup . Continuing along with the idea of a chowder I added a potato to make the soup a bit heartier. Up next was the seasoning and I went with ideas both from how I would season a burger patty and with the condiments that I would use in a burger including worcestershire sauce, ketchup and mustard. 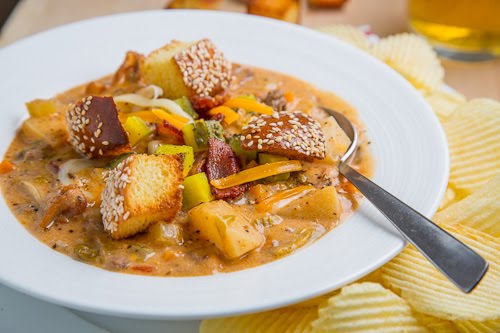 At this point the burger is looking more complete but we are still missing some things like the lettuce, tomatoes and of course the double cheeses. At first I was wondering about how I would get the lettuce into the soup but then I though, if I can use cabbage in a soup like the creamy cabbage and double smoked bacon soup then why not lettuce? A quick search online revealed that adding lettuce to soups is far from unheard of so I decided to add some shredded iceberg lettuce right need the end so that it would just wilt and get tender without over cooking. The tomatoes were easy as I just added a tin of diced tomatoes and then for the double cheeses I went with a combination of shredded cheddar and mozzarella cheese that was added at the end so that they would just have enough time to melt into the soup. The soup was of course finished off with a bit of milk to make it creamier like a chowder.
At this point the soup was pretty much done although there was still one component that was missing, the bun. I had thought about using buns as a thickener but I wanted the bun to be visible so I went with hamburger bun croutons to garnish the soup with. The bun croutons were made by tossing some cubed buns in a bit of leftover bacon grease and then baking them until golden brown. I also served the soup garnished with some reserved bacon, cheese and diced pickles for those that like pickles in their burgers.
In the end I was able to incorporate all of my favourite flavours of a bacon double cheeseburger into the recipe and I am pleased to say that as good as the recipe sounds the actual dish is way better! The bacon double cheeseburger soup exceeded all of my expectations and then some! This is easily the best soup that I have had in a long time and it really does tasty just like a bacon double cheese burger! If there is only one soup that you make this fall it has to be this bacon double cheeseburger soup!
Tip: When adding cheese to soups like this, add it at the very end and do not let the soup come to a boil after adding the cheese as the cheese will curdle and stick the the sides of the pot, the bowls and even the spoons. You can just remove the soup from the heat, let it stop bubbling and mix in the cheese. There will still be enough heat for it to melt into the soup. 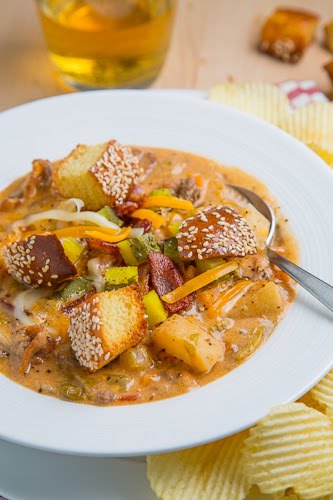 A tasty and hearty soup with all of the flavours of a bacon double cheeseburger.