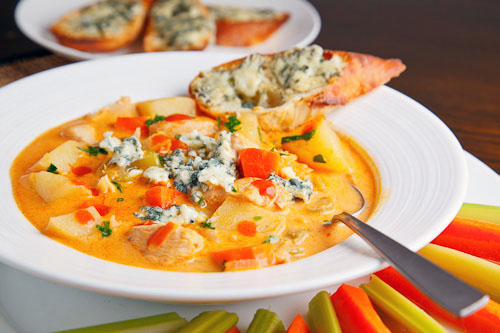 A hearty and creamy chowder with all of the flavours of buffalo chicken wings!

With the weather cooling down, soup season is here and I have certainly been taking advantage of it! During the warmer summer days, making a hot soup is one of the last things that I want to do but that does not mean that I stopped dreaming up new ideas for soups to try and I now have quite the list. On the top of that list of soup ideas was a buffalo chicken chowder! The basic idea was to make a soup with all of the flavours of buffalo chicken wings, which I just cannot seem to get enough of. I started the recipe out with some chicken and then I built up the base with onions, celery, carrots and garlic where I used more celery and carrots that I usually do in a soup like this as they are often served with buffalo chicken wings. Of course we cannot forget the star of the show and that is the hot sauce that the buffalo chicken wings are covered in so I added a healthy hit of that hot sauce directly to the soup. Although I could have gone with a nice light soup I was craving something a little on the heartier side so I decided to make it in the style of a chowder where I used some flour along with some cream to thicken it and some potatoes to bulk it up. Buffalo chicken wings are often served with a creamy blue cheese dipping sauce so I finished the soup off by melting some blue cheese into it and serving it with some more crumbled on top. 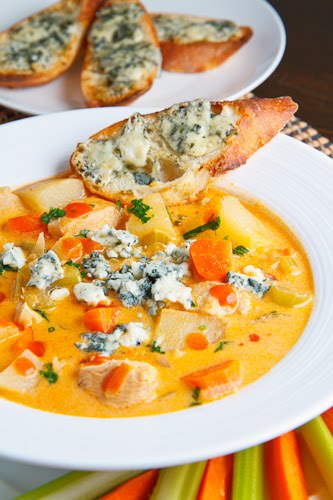 The buffalo chicken chowder turned out really well! A spoonful of this soup really does have all of the flavours of buffalo chicken wings and it’s on the healthier side so there are less worries about having a bowl of this soup than polishing off a plate full of chicken wings. I served the soup with some carrot and celery sticks along with some crostini topped with even more melted blue cheese. I can’t wait for lunch tomorrow when the leftovers are going to make my day at work!
Tip: If you are not such a fan of heat, add the hot sauce a bit at a time until you get it to where you like it!
Tip: If you are not a big fan of blue cheese, go with a mild blue cheese and use less of it, but d use some as it adds an amazing flavour to the soup. 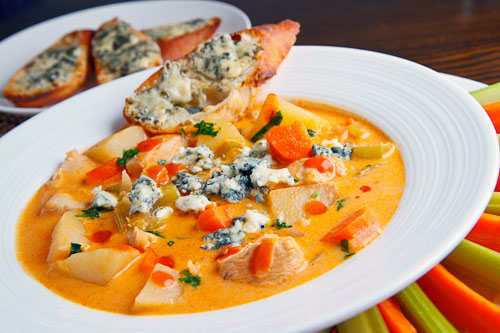 A hearty and creamy chowder with all of the flavours of buffalo chicken wings!