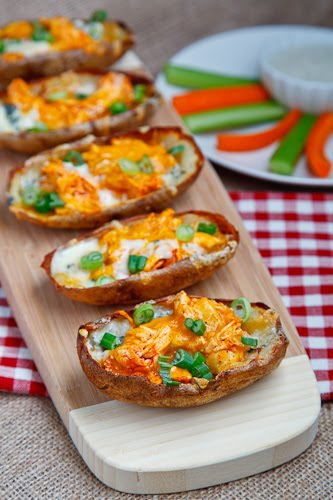 I have had the idea to do buffalo chicken stuffed potato skins for a long time now and what better time to pull out the skins than for the the big football game? The basic idea was to stuff some potato skins with chicken in a buffalo hot sauce along with cheese and baked them until the cheese melts and gets all nice and bubbly. I mean you really cannot got wrong with spicy buffalo chicken covered in melted cheese right? 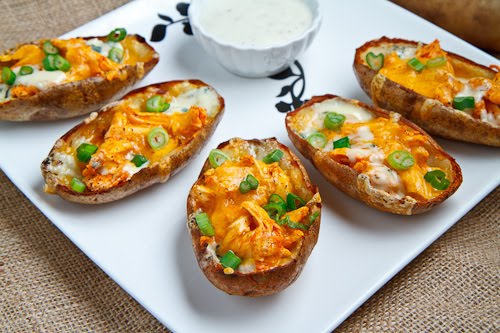 I started out by baking the potatoes until the insides were tender, though you could always save some time by microwaving them. After scooping out the insides of the potatoes I threw them back into the oven for some more baking to harden them up a bit so that they would hold together better when filled to the brim with the spicy buffalo chicken. I guess this extra step makes them thrice baked and it gives the edges of the potato skins a semi-crunchy texture which is particularly nice. Next up was the filling and I kept things simple by filling them with some cooked shredded chicken that was soaked in hot sauce. I was however torn over what to fill these potato skins with as I was also thing that buffalo chicken dip would also be an amazing filling. After a lot of hot cheesy dips over the last few weeks I decided to keep things on the lighter side and I went with the chicken in buffalo sauce. Blue cheese is commonly associated with buffalo wings so it was the obvious choice and I combined it with a bit of cheddar to keep it on the milder side. (If you are serving these to someone that is not a fan of blue cheese you can always go for all cheddar cheese and then just serve them with a blue cheese dressing that everyone can dip the skins into if they please.) Finally the buffalo chicken and cheese stuffed potato skins make one final trip to the oven to bake until the cheese has melted and then they are ready for your snacking pleasure. 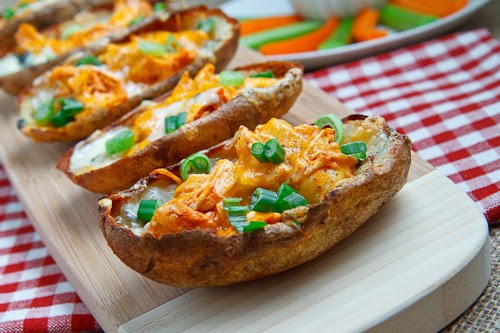