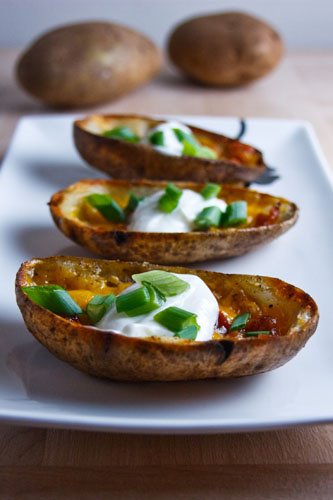 For my next football snack I was thinking that potato skins would be nice. I have had potato skins a few times before and I had enjoyed them and now I wanted to try making them myself. Potato skins are the skins of potatoes where the middles have been scooped out that are baked with a filling. Though you can fill the potato skins with whatever you want the most common filling seems to be cheese and bacon often accompanied by some sour cream. In my opinion, you can’t go wrong with cheese and bacon so that is what I went with. Potato skins are pretty easy to make though they require a some time to bake the potato. You could speed things up a bit by cooking the potato in the microwave instead of baking it before scooping out the middle. The potato skins with cheddar cheese and bacon turned out great! The skins were a little crispy along the edges and soft and warm in the middle. The cool sour cream went well with the warm potato skins and their flavourful filling. Another perfect snack for game day.