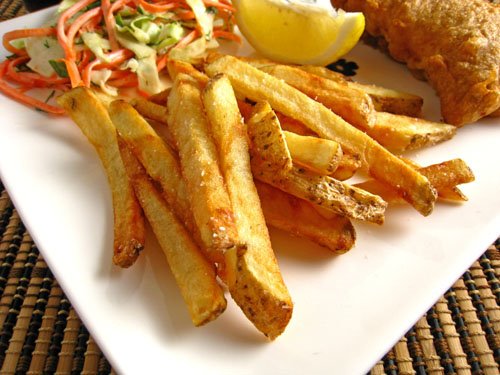 The final part of my fish and chips meal was the chips. Given the number of restaurants that don’t seem to be able to get french fries right, I was expecting them to be rather difficult to make. I like my fries nice and golden brown and slightly crispy on the outside and soft, warm and creamy on the inside. I had heard that a good way to get nice and crispy fries was to fry them twice. The idea is that you fry the hard raw potato slices until they are soft and floppy and remove them from the oil. The temperature of the oil is then increased and the fries are fried a second time. Since I don’t have a deep fryer I used a large sauce pan filled with oil and I estimated the temperatures. I was a little bit surprised that the chips came out really well; They were just how I like them. I enjoyed the chips with salt and malt vinegar and I dipped a few of them into the tartar sauce . They really made the fish and chips meal complete. In the future, when I have a craving for chips I will be able to satisfy it at home.