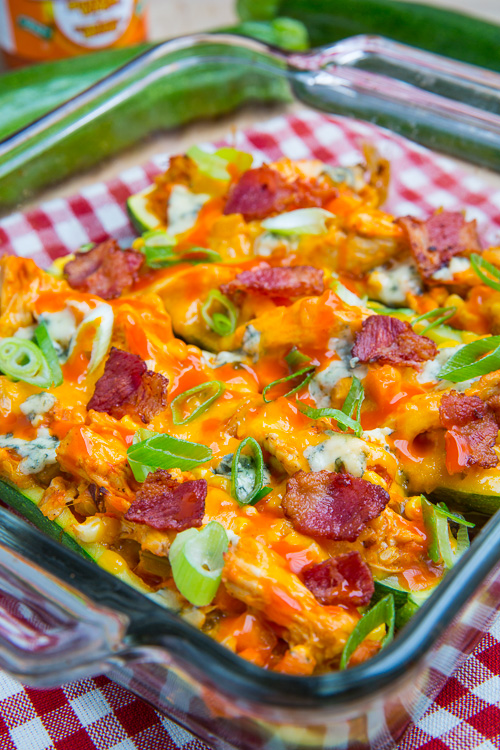 Zucchini stuffed with buffalo chicken and corn topped with bacon, plenty of melted cheese and an avocado blue cheese dressing!

With all of the things that you can do with zucchini (aka courgettes) one thing that I find that I come back to year after year is stuffing it; I mean you really can’nt go wrong with stuffing zucchini with all sorts of good things! This year the first thing on my list to stuff into zucchini was one of my obsessions, buffalo chicken! The basic idea behind this kind of stuffed zucchini (aka zucchini boats) is that you cut the zucchini in half lengthwise, hollow it out and stuff it with a filling before baking it. Since this inspiration for this stuffed zucchini was buffalo chicken wings I started the filling out with some diced carrots and celery which are often served with the wings. Corn is also in season now and I was thinking that the sweetness of it would pair nicely with the spicy buffalo chicken flavours so I added some to the mix and together with carrots, celery and the zucchini that was hollowed out I had a really nice vegetable base. Up next of course was the chicken along with the buffalo hot sauce and a touch of blue cheese. When you are baking a dish like this it is always nice to top it with some cheese that will melt all over everything so I threw on some cheddar. I could have left things here with one super tasty buffalo chicken stuffed zucchini but I could not resist including two more of my favourite ingredients including bacon and avocados. I added the bacon simply by sprinkling it on as garnish and the avocado by mixing it into some blue cheese dressing that I drizzled over everything.
With so many good things in this buffalo chicken stuffed zucchini I knew that it was going to be good but I was not prepared for just how good! The first bite was almost magical and after I had devoured my first plateful I knew that I had just made my all time favourite new dish for the summer! If you are a fan of buffalo chicken this is one dish that you just have to try while there is plenty of zucchini around!

I served the buffalo chicken stuffed zucchini with a simple salad using the avocado blue cheese dressing for a light and super tasty summer meal! 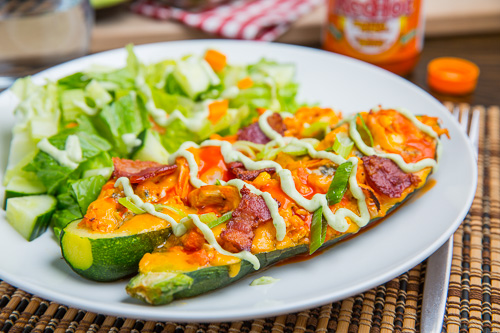 The avocado blue cheese dressing is so addictively good! I have a feeling that I will be using it on everything for the next little while! 🙂 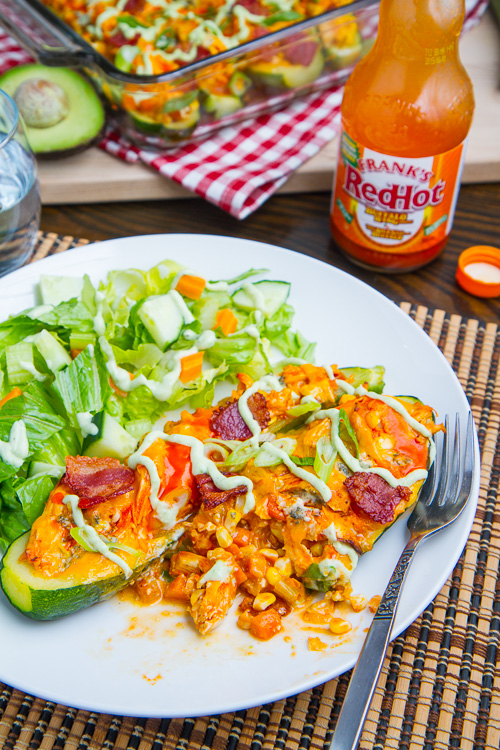 Zucchini stuffed with buffalo chicken and corn topped with bacon, plenty of melted cheese and an avocado blue cheese dressing!