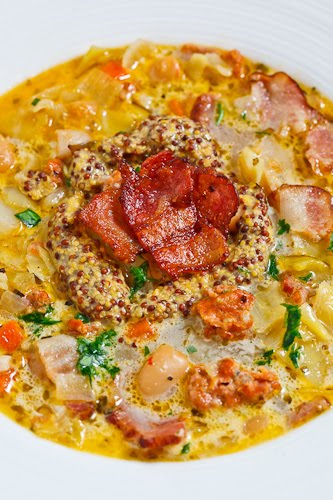 A hearty creamy soup with double smoked bacon, sausage and cabbage that is just packed with flavour.

With all of the freezing cold weather that we have been having over the last few weeks I have been in full on soup mode and I have been trying some new ones. By far my favourite so far is this soup from the description of one of the soups of the day at Porchetta & Co here in Toronto. The soup was described as containing cabbage, double smoked bacon, sausage and white beans and it was topped with a garnish of grainy mustard. I was immediately sold on the idea and I knew that I would have to try the soup! The only problem was that as a daily soup I could not count on it being there when I went so I decided to make it myself.
I started out by cooking some hot Italian sausage long with the double smoked bacon in a saucepan to start building up the flavour. I then moved on to the soup trinity of onions, celery and carrots which I cooked in the rendered bacon grease followed by healthy dose of garlic. The soup was described as being creamy and since it also contained beans I decided to get some of the creaminess by pureeing half of the beans in a food processor so that I would be able to cut back a bit on the heavy cream. To maximize the flavour I use a homemade chicken stock which was pretty much the final piece of the soup.
This creamy cabbage and double smoked bacon soup is easy to make and it is just packed with flavour! The beans add a really nice creaminess to the soup and I especially enjoy the smokiness that the bacon adds. I have been hooked on grainy mustard ever since I discovered it a while ago and using it in soups is particularly nice. In the past I have simply mixed a tablespoon or so directly into the soup but using it as a garnish on the soup like I did here was also amazing! Luckily I have enough of this tasty soup leftover to keep me warm for the rest of the week!

A hearty creamy soup with double smoked bacon, sausage and cabbage that is just packed with flavour.