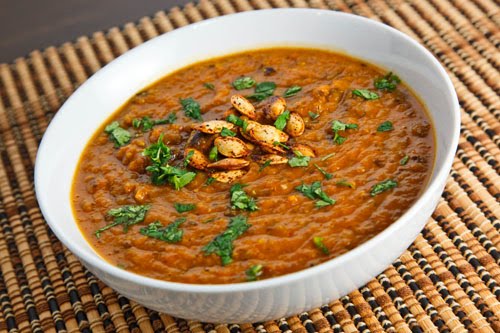 Pumpkins are definitely in season now and I have been roasting them up to make and freeze pumpkin puree for later. When I came across the idea of a pumpkin and black bean soup on gimme some oven I diverted some of my pumpkin puree from the freezer and into making the soup. I have enjoyed the sweet pumpkin and creamy black bean combo in several other dishes in the past so I knew that this soup would be a winner. This pumpkin and black bean soup is a pretty standard vegetable soup that is nice and easy and focuses on the pumpkin and black beans. The soup is seasoned with some texmex flavours including some smoky chipotle chili powder for some heat and some cumin and cilantro to round it out. I was looking for a lighter soup so I went with a vegetarian version but you could easily make this soup a little heartier by adding cubed cooked ham or bacon, both of which would also add a ton of flavour. One of the things that I like about soups like this is that you can easily control how thick or thin the soup is by controlling how much broth you use and how much you puree the soup. I made my soup nice and thick and I increased the amount of chili powder for some extra heat which went perfectly with the sweet pumpkin. I garnished the soup with some fresh chopped cilantro and chipotle toasted pumpkin seeds .