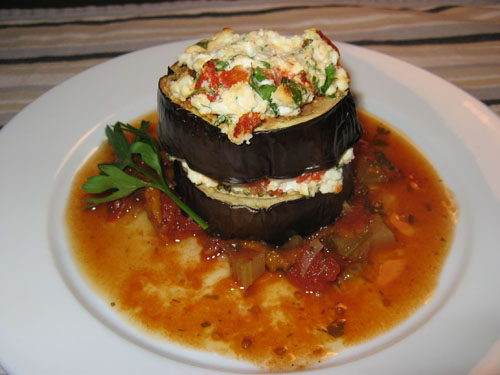 It is getting near the end of the week and I was looking into cleaning out my fridge. Among other things I had a half an aubergine, a half of a roasted red pepper, some marinara sauce and some goats cheese. I remembered seeing a photo of some stacked eggplant slices and decided to make an eggplant tower. I really like grilled eggplant so I grilled the eggplant slices first. It turned out pretty good though it was a bit light. The eggplant that I had was rather small and there was not enough left for a second so I added a salad to complete the meal.

Note: You can broil a fresh red pepper at the same time as the eggplant if you do not have roasted red pepper.