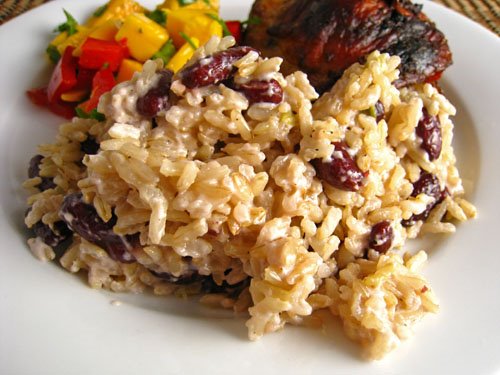 While I was searching for jerk chicken recipes I came across the a Jamaican red beans and rice side dish that sounded interesting. I though that having a bean and rice side dish with the jerk chicken would be a nice way to cool off the tongue in between bites of the spicy jerk chicken. The red beans and rice were also cooked in coconut milk which I really enjoy. The most interesting part of this recipe is that you cook the rice with a whole scotch bonnet pepper in it to give it the flavour of the scotch bonnet without too much of the heat. Rice is pretty easy to cook on the stove top or I would think that this would work well in a rice cooker. I decided to use brown rice to make it a bit healthier. The red beans and rice turned out pretty good. It was nice and tasty and even though it was spicy, compared to the chicken it was nice and cool and refreshing.