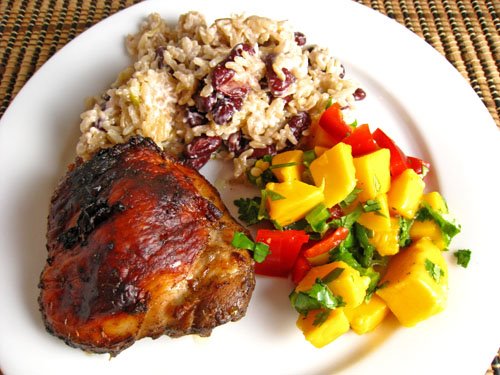 I had been wanting to try exploring Jamaican cuisine for a while and a jerk spice was the first thing on my to try list. A jerk spice is spicy marinade for meats that primarily consists of allspice and scotch bonnet peppers. I had heard a lot of good things abut the scotch bonnet pepper, mainly being that it was nice and hot, and I had been wanting to try it. The remaining ingredients in the jerk mix can pretty varied. I found a bunch of recipes and picked and chose what I liked from them and I came up with this one. Because the scotch bonnet peppers were supposed to be really hot I started the marinade with just one and tasted it. It was pretty mild so in went a second followed by a third. I was thinking that the spice level would go up as the marinade sat and did its job so I stopped at three. Although the final result was nice and spicy I think I will go with five the next time that I make this.
For the first use of the jerk marinade I decided to do a jerk chicken dinner. I Marinated some chicken thighs in the jerk marinade overnight and roasted it in the oven. A nice and simple dish. The jerked chicken was nice and tasty. I really enjoyed the combination of flavours in the jerk spice mix. The jerk seasoning was spicy but not as hot as I would have liked. I served the jerked chicken with a simple mango and red pepper salsa to cool things down a bit and some Jamaican red beans and rice . Overall it was a really tasty meal! 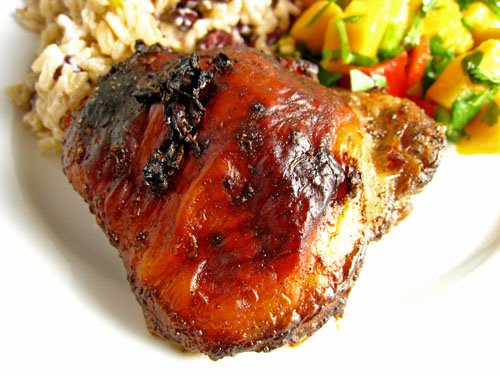