With the Chinese new year in just a few days I thought that it was about time to practice my dumpling making skills. Jiaozi or Chinese dumplings, consist of a filling, generally a ground meat, that is wrapped in a thin wrapper and sealed by pressing the edges together or by crimping and they are commonly served with a dipping sauce. The dumplings can be cooked by frying them, steaming them or boiling them. Although steaming or boiling them is probably a little better for you, I prefer the fried version as the bottoms get nice and crispy and when they are fried they are often referred to as pot stickers. Dumplings are a popular New Years dish and since they are one of my favourite Chinese dishes it was the perfect excuse to make some at home. 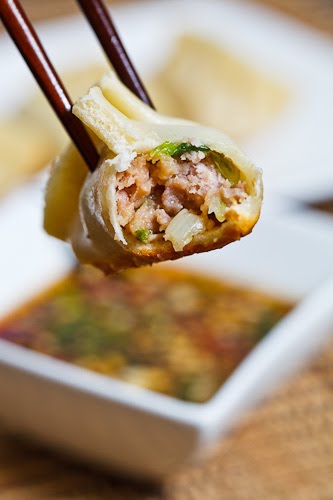 There are near limitless fillings that you can place in dumplings but I was dead set of including shrimp in mine. I made sure to cut the shrimp very coarsely because I wanted to get large pieces of juicy shrimp in the dumplings. From there I filled out the dumplings with some fairly common ingredients including pork, cabbage, bamboo, garlic, ginger, soy sauce and sesame oil. For the dipping sauce I decided to go with a simple soy and vinegar sauce that I spiced up with a bit of chili oil and a birds eye chilies.
While I was investigating recipes I came across a recipe for Chinese dumplings on use real butter that included a recipe for making your own wrappers which I immediately decided to try. The dough was a little difficult to work with given that it was so dry but after adding a bit more water it worked out just fine. I was not very good at rolling the dough out into perfect circles but using a ramekin as an outline I was quickly able to trim them into nicer discs. Since I had already picked up some pre-made wrappers I made half with homemade and half with pre-made to compare them and I have to say that I definitely preferred the homemade version which were thicker chewier. 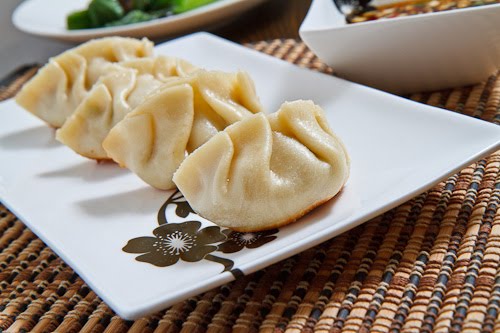 One caveat with this recipe is that it takes a bit of time to wrap all of those dumplings so you need to plan for it. If you are also making the wrappers then it takes even longer but it is definitely worth it! 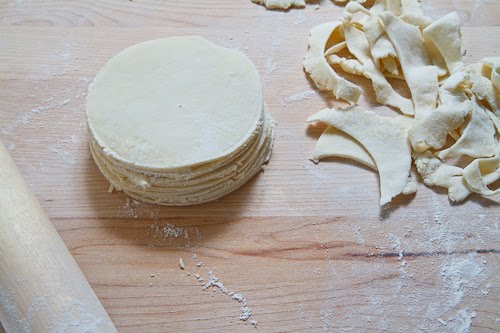