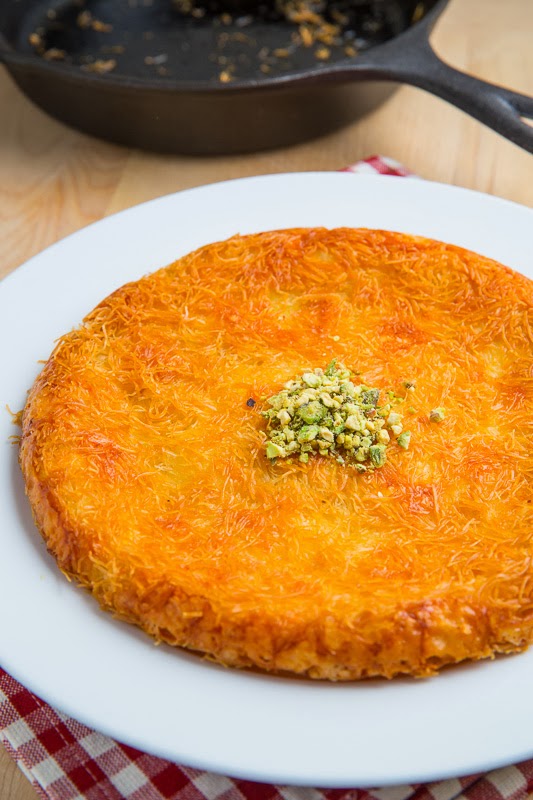 A pastry consisting of hot cheese in between layers crispy shredded phyllo dough in a sweet syrup that is common in Greece, Turkey, Israel and many other countries in the area.

A few months ago I got an email inviting me to explore Israel, it’s people and it’s cuisine on a project called Taste of Israel put on by a group called Stand With Us. At first I was a little leery about the offer but after a bit of research it seemed legit and it was an opportunity that I simply could not pass up and so I went! It turned out to be an absolutely amazing experience filled with lots of great people and of course plenty of amazing food! I enjoyed a lot of dishes in Israel and I just had to try making a few of them at home and sharing them with you!

The adventure started as soon as we got off the plane, after almost 20 hours travel time from Toronto, as we were whisked away to the beautiful Dan Hotel Tev Aviv where after checking in we headed out for dinner at Yaffo Tel Aviv restaurant by Haim Cohen. The meal that we had there was filled with plenty of tasty dishes including a flat bread that was covered in melted garlicky butter and roasted cherry tomatoes but the one dish that really stood out for me was a dessert, the kanafeh.

I had never heard of kanafeh before but as soon as I heard that it was warm cheese in between two layers of light flaky pastry, I was sold! I mean you really cannot go wrong with cheese and I loved the idea of using it in a dessert! This particular künefe was made with goat cheese and it was topped with a sweet apple sauce and the combination of sweet and savoury was phenomenal; I knew immediately that I would have to make kanafeh when I got home! Kanafeh (aka Kunafeh, aka Künefe, aka…) is a pastry that is common to countries in the Levant region including Turkey, Israel, Greece, etc. and and there are as many different ways of spelling it as there are of making it. It’s commonly made with the shredded phyllo like pastry, with the same name as the final dish, and it is usually filled with a neutral, non-salty, stringy cheese and it is baked until the pastry gets nice and golden brown and crispy and it is then smothered in a simple syrup. (Imagine something like a single layered baklava with a cheese filling instead of nuts.)
Of course the first task that I had before I could make it was finding the pastry which turned out easier than I expected because Greeks use something similar, called kataifi, so I was able to find it next to the phyllo pastry in a local grocery store. Next up was the cheese and different cultures use different cheeses, most of which I had never heard of, but the common properties are that it is neutral and not salty and that it is stringy. As it turns out, as easy substitute is to combine feta, that has been soaked in water to remove the saltiness, and mozzarella.

Once I had all of the ingredients it was as easy as coating the pastry in butter, pressing it into a pan and topping it with the cheese and more pastry before baking it until golden brown and crispy. I do not normally think about using cheese in desserts and it’s really a shame since they work so well and this dish is a perfect example with it’s crispy pastry outside and stringy cheese inside all covered in sweet syrup! I will definitely be making this a lot in the days to come!
As it turns out Haim Cohen, the owner of the restaurant is also a judge on the Israeli Top Chef show and he was at the restaurant when we were there so we got to chat with him about food for a while. 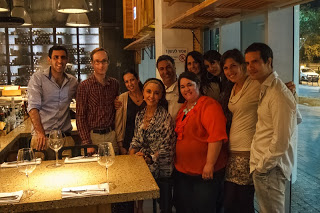 The fantastic group of people that I traveled with. Jennifer Melo Alice D’Antoni Philis of Allys Kitchen, Amy Huntley of The Idea Room, Heather Thoming of Whipperberry and the amazing people that organized everything!
Stay tuned for more recipes from my adventures in Israel! 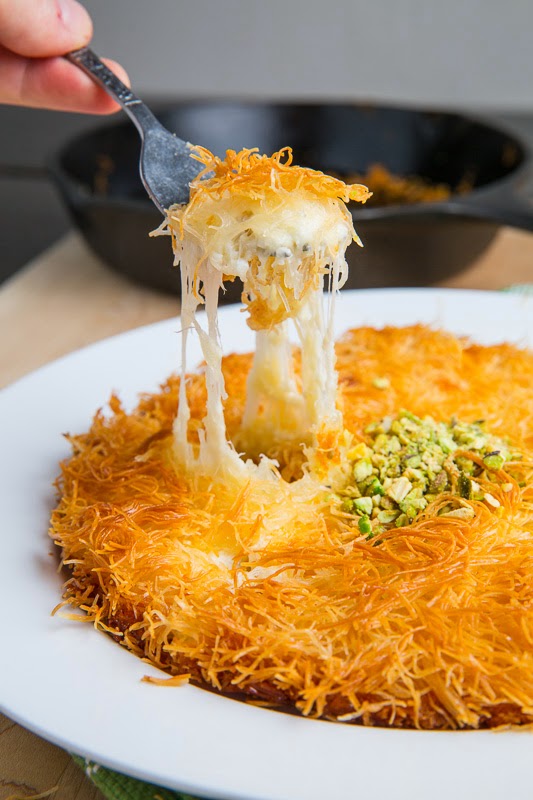 I could not leave you without some stringy cheese shots! 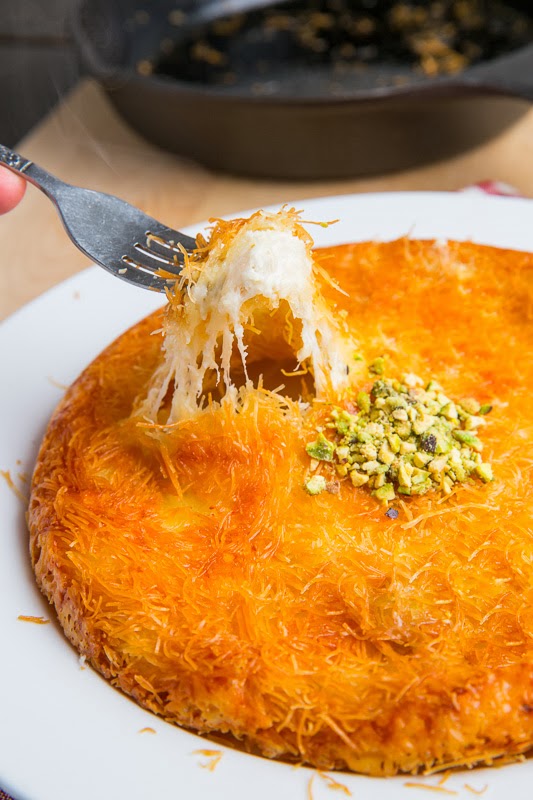 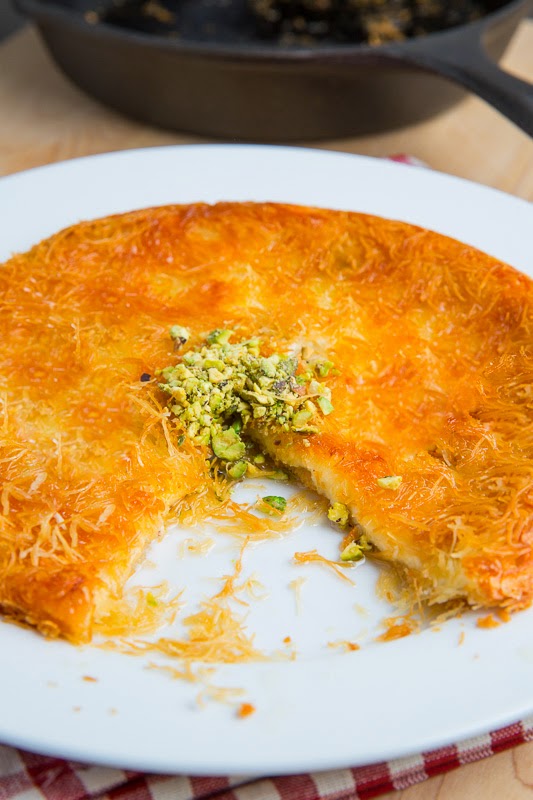 In addition to making the standard kanafeh I did make one with goat cheese and topped it with a simple home made apple sauce and it was also amazing! 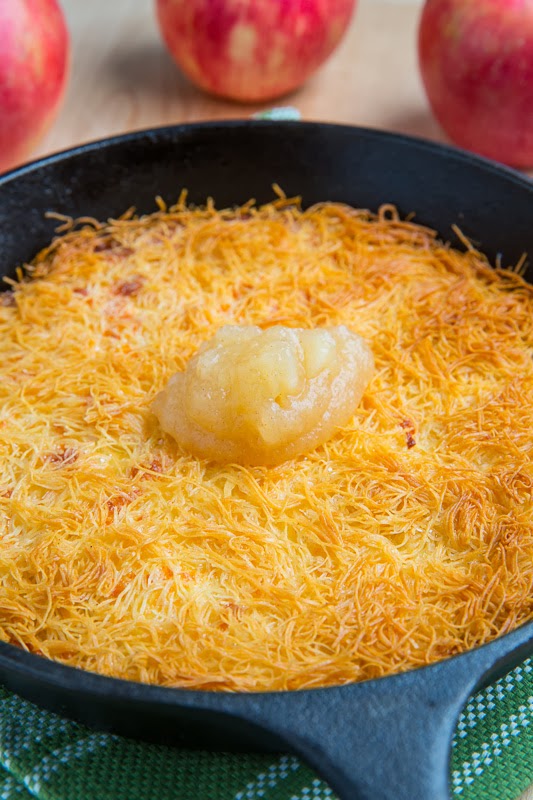 A pastry consisting of hot cheese in between layers crispy shredded phyllo dough in a sweet syrup that is common in Greece, Turkey, Israel and many other countries in the area.