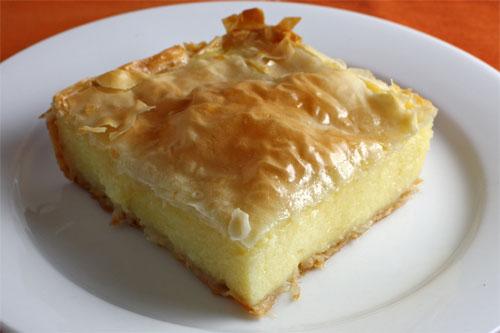 While I was in Greece I got to try a few new Greek treats and one of my favorites was galaktoboureko. Galaktoboureko (aka milk börek) is a custard pie that is wrapped in phyllo dough and covered with a lemony syrup. The custard is made from milk, semolina and eggs and has a surprisingly pleasant texture. I constructed this recipe from those that I found on the web while trying reconstruct the flavour and texture of the galaktoboureko that I had while in Greece. (I often find it fun to try to reproduce dishes that I have had from memory.) I was a bit surprised to find that none of the recipes called for honey which I am sure was in the piece that I had so I added some to the syrup. I also added some cinnamon to the syrup to add another layer of flavour. The rest of the recipe is pretty standard. The galaktoboureko turned out really well. The phyllo dough baked up nice and light and crispy and flaky and good. I really enjoyed the texture of the custard and its slightly sweet and lemony flavour. The layers of the phyllo dough soaked up and retained the extra syrup which added a touch of cinnamon which added something slightly exotic. The only problem that I am having is that it is disappearing too quickly.

You can flavour the custard and/or the syrup with lemon, orange, or rose!