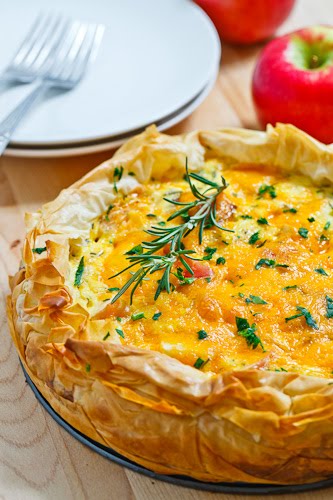 I am back in the kitchen and I hope that everyone had a great Christmas filled with tasty food!
The week in between Christmas and New Years can be a bit hectic and I wanted to try to simplify things by making some meals ahead of time. I like to have quiches for breakfast and one of the reasons is that there is generally a lot of leftovers and they reheat well for quick and easy breakfasts during the week. This recipe will make enough for a few breakfasts for one or two people and it can be doubled for larger families. Another thing that I like about quiches is the near limitless possibilities for different flavour combinations. This apple and cheddar quiche was inspired by the flavours in the apple and cheddar tart that I recently made and enjoyed!
I started out by simmering chunks of apple in cider until they just turned tender and I did this because I knew that apple would not cook enough in the quiche to get tender and nobody wants to bite into a hard piece of apple when eating a quiche. Next I added a strong cheddar to finish off the primary flavours in the quiche. Since the rosemary went well in the tart I added some to the quiche as well and I figured that a bit of salty bacon would also be a hit. To keep things simple, I went with a pre-made frozen phyllo dough crust.
I have to say that the apple and cheddar flavour combination with rosemary works very well in quiche form! I was particularly happy with the way that the phyllo dough crust worked out. Even though it was full of an egg mixture, the phyllo still got crispy and it allowed for a ‘deep dish’ style of quiche that was really nice. I served the apple and cheddar quiche along with an arugula salad with walnuts, feta and a simple lemon and oil vinaigrette. 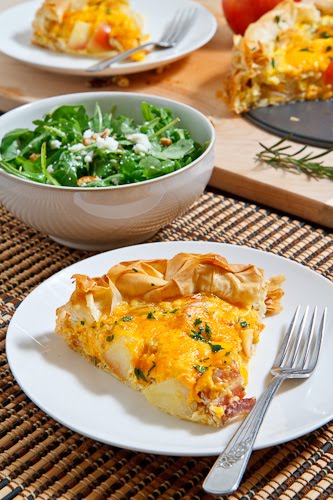