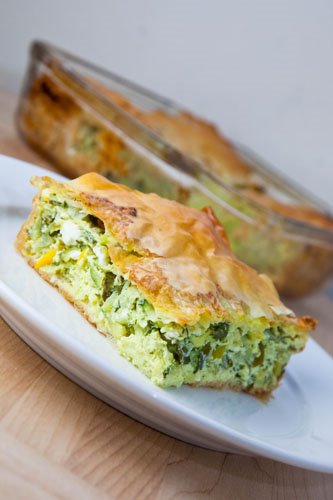 Yesterday I had the opportunity to head down to the Taste of the Danforth Greek food event here in Toronto and I had a good time. There was a lot of tasty Greek food and I took a bunch of photos which can be found in my Taste of the Danforth flickr gallery if you are interested. All of the great Greek food just whet my appetite and I wanted more. While I was eating the fresh zucchini salad the other day, I thought that it would make a great filling for a phyllo pie like a spanakopita . For the recipe I pretty much just took the zucchini salads recipe and added some eggs as a binder, wrapped it in phyllo dough and baked it until it was golden brown. The zucchini phyllo pie turned out great! The phyllo ended up nice and golden brown, light and crispy and good. The herbed zucchini and feta filling worked really well in pie form and it was nice and tasty. I liked the combination of the fresh dill, mint and parsley which added a ton of flavour and a sense of freshness to the pie. I have really been enjoying these savoury phyllo pies and I can’t wait to try some new ones.