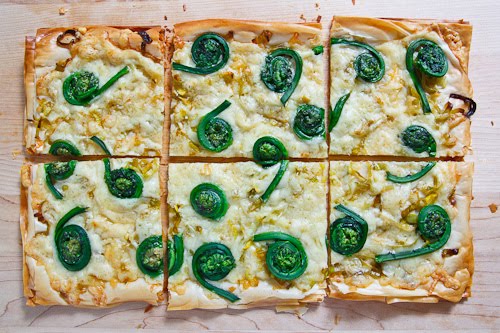 A fiddlehead and leek tart covered in melted gruyere on a light and flaky, golden brown phyllo crust.

Another ingredient that is available during spring is the fiddlehead fern and the last few years I have been enjoying experimenting with them. Fiddlehead ferns are young ferns that are picked before the frond has opened. They are commonly used as a vegetable and their flavour can be compared to that of asparagus. This year I knew exactly what I wanted to do with the fiddleheads, a savoury fiddlehead tart! For the base of the tart I used sheets of phyllo dough and I topped them with some sauted leeks with a bit of garlic and then I covered everything with a layer of gruyere cheese followed by the fiddlehead ferns themselves. I like using phyllo pastry for tarts like this as it bakes up nice and light and flakey and golden brown which is perfect for a light spring meal. 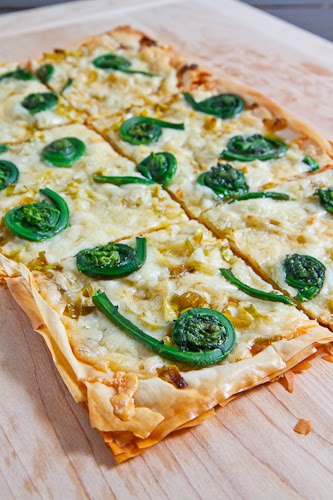 A fiddlehead and leek tart covered in melted gruyere on a light and flaky, golden brown phyllo crust.