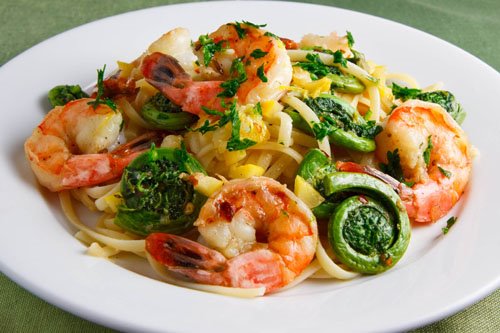 Another new ingredient that I discovered this Spring was fiddleheads. Fiddleheads are young fiddlehead ferns that have yet to unfurl they leaves and they are only available for a short period of time during the Spring. I first saw them at the farmers market and later I was a bit surprised to also find them at a few main stream grocery stores. Of course, I picked some up right away to try. While looking around for recipes I kept coming across the suggestion to boil them for at least three minutes before cooking them over safety concerns for toxins.
The first thing that I did with the fiddleheads was a simple saute (after boiling them for 3 minutes) in some olive oil with some chopped up ramps and a simple seasoning of salt and pepper. I really enjoyed the sauteed fiddleheads and I would imagine that sauteing them in butter would also be excellent. A sprinkling of parmigiano reggiano might also be a nice addition.
Now that I had experienced the fiddleheads I was looking for a recipe to use them in. While I was thinking about them I was thinking about spirals and then shrimp popped into my head. I was also thinking about wanting to use the preserved lemons that I had made in a new dish. I decided to combine all of the ideas and make a shrimp scampi with fiddleheads and preserved lemons. Fiddleheads in a pasta with a buttery lemon sauce with shrimp sounded good. I also thought that replacing the garlic in the shrimp scampi with the in season ramps would be a nice touch. It is hard to go wrong with shrimp scampi and this Spring version with fiddleheads, wild leeks and preserved lemons also turned out great! The fiddleheads worked well in the scrimp scampi and they were really nice in the buttery lemon sauce with a background of wild leeks. The preserved lemons also worked well in the scampi kicking up the lemon flavour and adding a new texture. What a great way to enjoy the fiddleheads! I will definitely be keeping an eye out for them again next year!