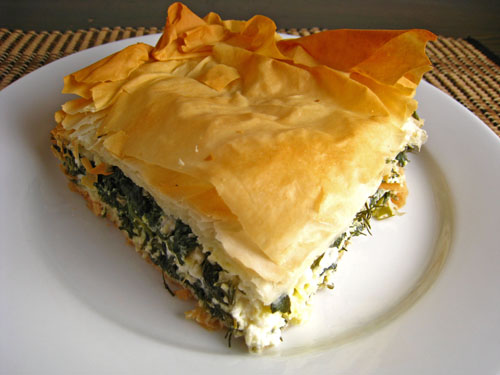 A Greek style spinach and feta pie wrapped in light and flaky golden brown phyllo dough. The abundance of fresh herbs including dill as what truly makes this pie special.

I have been wanting to try making spanakopita ever since I started exploring Greek cuisine. Spanakopita is a Greek pastry filled with spinach and cheese. I had been putting off making it because I had not worked with phyllo dough and it sounded a bit intimidating. Since I had now used phyllo dough to make baklava there were no more excuses to stop me from making the spanakotiropita.
The spanakopita turned out to be really easy to make. The filling is as simple as blanching the spinach and mixing all of the ingredients. The hardest part was working with the phyllo dough and once you get the hang of it, it is pretty easy as well. The phyllo dough needed to be thawed in the fridge over night. I set up a working area where I could stack the unused phyllo dough, brush the phyllo sheet that I was currently working on and then easily place it into the baking pan. With everything set up ahead of time working with the phyllo dough was pretty easy and the spanakopita came together in no time.
I decided to go with a pretty simple recipe sticking to the basics of spinach, feta and dill. The spanakopita was so amazingly good!! Spinach, feta and dill has to be one my favorites flavour combinations! The crust was nice and light and flaky and golden brown and crunchy and good. The Spinach filling was moist and super tasty! I made the crust thick enough that I could pick up the slice and eat it without having to cut it with an knife and fork. The leftovers still tasted great right out of the fridge but the crust was no longer crispy. I can’t wait to make this again!

A Greek style spinach and feta pie wrapped in light and flaky golden brown phyllo dough. The abundance of fresh herbs including dill as what truly makes this pie special.