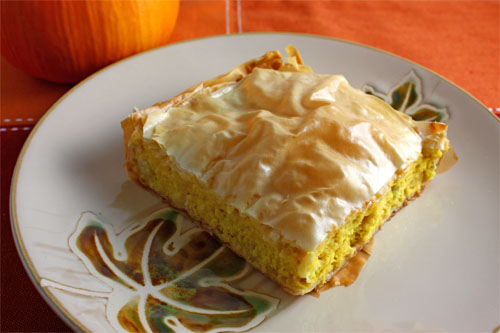 This weekend I got the chance to go back to my normal routine; I had time to make a meal plan, go to the farmers market, etc. I was just itching to try some recipes from my vacation in Greece and this was the at the top of my list. On my first night in Greece, after I had settled into my hotel room and walked around the neighborhood a bit it was about 10pm and I was hungry. I found a nice looking taverna with sidewalk seating so that you could sit down, relax and watch the world walk by. Luckily the taverna had quite the menu and I made sure to look at everything on it before ordering. I recognized most of the dishes on the list and I wanted to try authentic Greek versions of all of them. I got to the section on pies and I saw the spinach pie and the cheese pie, both of which I was familiar with, but there was a third pie in the list, a pumpkin pie. This was the first that I had heard of a Greek pumpkin pie and it was under the meal section not the dessert section so I could only assume that it was a savoury pie rather than a sweet pie. Unfortunately, when I tried to order it I was informed that that section of the menu was no longer available, I guess by 10pm they are only serving the dinner part of their menu. Oh well, not to worry, since it was my first meal in Greece what better place to start than a gyro, preceded by some tasty saganaki?
I never did get to try a Greek pumpkin pie in Greece but as soon as I got home I looked it up on the web and I found this recipe for a pumpkin pie or kolokithopita . This is a nice and simple recipe where the filling is simply pumpkin puree, feta and some eggs to bind, all wrapped in crisp and crunchy phyllo pastry. The original recipe called for rolling the phyllo dough up around the filling but I decided to go with more of a pie shape. I also threw in some fresh sage because I had them on hand. The savoury pumpkin pie turned out pretty good! I really liked the way the sweet pumpkin paired with the salty feta cheese. I enjoyed the pumpkin pie warm the first day and straight out of the fridge the second day and it was good both ways. I am thinking that a sweet pumpkin pie would be really nice cooked in a phyllo dough crust as well.