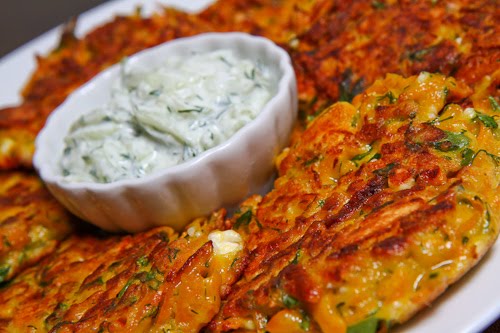 During the summer while I was enjoying some tasty zucchini (or summer squash) and feta fritters I wondered if a winter squash version would work. I had previously done a savoury pumpkin pie that I really enjoyed but it used pumpkin puree. If I used pumpkin puree in the fritters I would need to add a lot of flour allow them to hold their proper fritter form. I like my fritters main ingredient to be the vegetable that they are made from rather than flour so I put the idea on the back burner for a while… Recently inspiration struck! Why not use grated pumpkin rather than pumpkin puree? Would the grated pumpkin cook with just a few minutes of frying? I just had to try it! I took the zucchini and feta fritters recipe and I simple replaced the grated zucchini with grated pumpkin. The pumpkin fritters turned out beautifully! Even with just a few minutes of cooking the pumpkin did get a chance to cook all the way through and it was nice and tender and good. Pumpkins are generally a little on the sweet side and that sweetness worked rather well with the salty feta and fresh dill. I used grated kabocha pumpkin but any type of winter squash such as butternut squash would also work well. Since I had some fresh dill for the fritters anyways I whipped up a fresh batch of tzatziki to go with them.