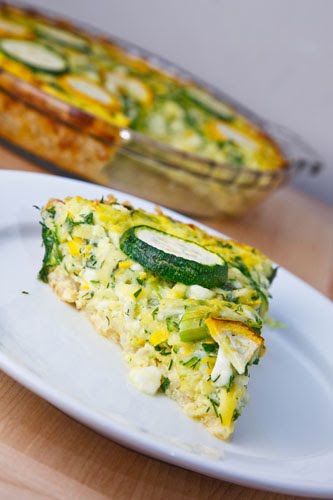 Over the last few weeks the farmers market has been bursting with zucchini and it has been so cheap that I have been picking up a bunch of it every week. I have really been enjoying all of the fresh local zucchini and in particular I have been focusing on the grated zucchini, feta, and herb combination. So far I have made a raw salad and a Greek style phyllo pie with this combo and both turned out really well. While I was dreaming up the previous ideas it also occurred to me that a this combo would go well in a quiche. I pretty much just took the grated zucchini, feta and herb combo and mixed it into a quiche base including eggs and milk. Although a pastry crust would go well with this quiche I enjoyed the brown rice quiche crust that I made last time so much that I decided to use it again this time. The herbed zucchini and feta quiche with a brown rice crust was easy to make and it turned out great! The brown rice crust was slightly crispy on the outside and the slices held together well. I enjoyed the texture that the brown rice crust added to the quiche and it is not as guilty as a full butter pastry crust. The zucchini, feta and herb combo worked really well in the form of a quiche! The quiche was nice and light and moist and it was just packed with flavour. It is amazing how much flavour the feta, dill and mint bring to the table.

Herbed Zucchini and Feta Quiche with a Brown Rice Crust