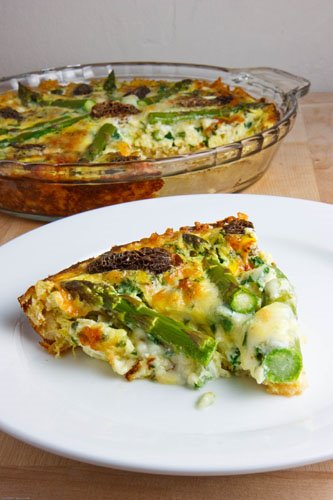 Spring may have been a little slow in arriving but it is certainly here now. At the farmers market this weekend I found some of the first of the locally grown asparagus. In addition to the asparagus I found some ramps and some morel mushrooms both of which I had been wanting to try. Ramps , or wild leeks are a member of the onion family and they are commonly described as tasting like a cross between onions and garlic. Given that I use onions and garlic so commonly in my cooking, I just had to try the ramps.
One of my favorite ways to welcome in Springs fresh produce is with an asparagus quiche . I figured that an asparagus quiche with morel mushrooms and ramps would be tasty indeed. I had been wanting to try a brown rice crust for a quiche for a while now and this seemed like the perfect opportunity. The brown rice crust sounded lighter and healthier than the more standard pie pastry crust. The pictures that I had seen of the brown rice crust always looked nice and golden brown and good.
The brown rice crust was really easy to make. It is pretty much just some cooked brown rice, an egg and some cheese that is pre-baked in the pie plate for a few minutes before pouring in the quiche filling and baking the quiche. The quiche was as easy as mixing and baking making this a pretty simple recipe overall. The asparagus, morel mushroom and ramp quiche with a brown rice crust turned out great! The brown rice crust baked up nice and golden brown and it was slightly crispy. I will definitely be using this brown rice crust again. The quiche itself was nice and tasty! It is hard to go wrong with eggs, milk and cheese and the ramps added an amazing aroma and flavour to the quiche. The morel mushrooms were really good, though at the price that I paid for them they will be a special occasion item. This quiche was an amazing way to welcome in Springs bounty this year! Now I need to come up with some more ideas for enjoying ramps while they are in season.

Asparagus, Morel and Ramp Quiche with a Brown Rice Crust