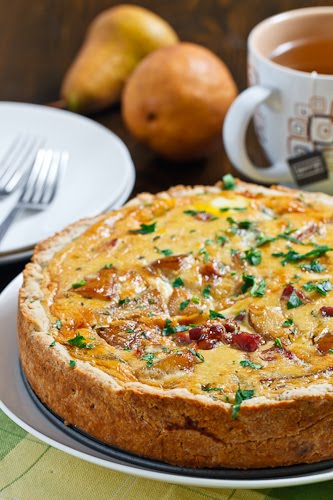 Although I have been enjoying the pumpkins and winter squash a lot lately, I was ready for a bit of a change and that got me to thinking about other fall produce that I enjoy. Pears are one that I have regularly but I rarely seem to use them in recipes and now was the perfect opportunity to do so! I still needed something for breakfasts for the week and that reminded me of the pear and gorgonzola omelette that I had enjoyed so much last year and I recalled thinking that it would also be nice in quiche form at the time. I simply could not resist the idea of using one of my favourite flavour combinations, pear and gorgonzola, so I had my breakfast idea, a pear and gorgonzola quiche.
I figured it would not be all that fun to be biting into your light and fluffy quiche only to hit a rock hard piece of pear so I wanted to cook the pear a bit before putting it into the quiche. There are a few ways to do this and although poaching the pears crossed my mind I went with a simpler solution and I just sauteed the pear in some butter and brown sugar until tender. The sweetness added by caramelizing the pears like this goes surprisingly well with the pear and tangly gorgonzola combo in eggs. Next up, I wanted something salty to balance things out and diced pancetta sounded like they would do the trick nicely. I also wanted to work a nut into the quiche somehow but I did not like the sound of biting into nuts in a quiche so I decided to replace some of the flour in my my all butter crust with ground walnuts. 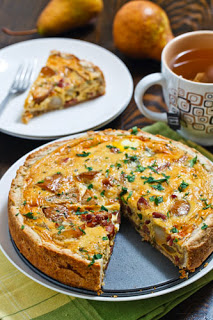 The caramelized pear and gorgonzola quiche turned out amazingly well! The pear and gorgonzola flavour combo proved once again why it is a classic and it worked really well in a quiche. Caramelizing the pears first added a nice hint of sweetness that was balanced by the salty pancetta. Most of all, I really enjoyed the way that the ground walnuts worked in the butter pastry crust and I will definitely have to remember to try adding nuts to future pie crusts like this. 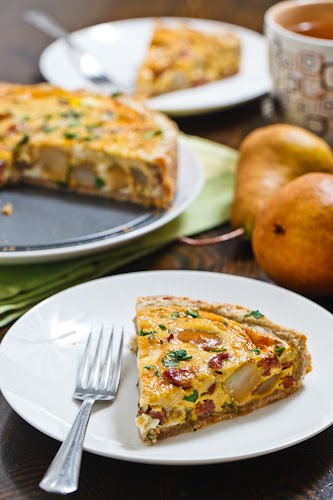