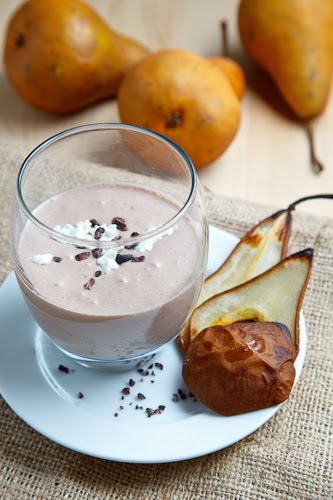 Sweet caramelized pear, chocolate and tangy goat cheese are a magical when combined in this smoothie that is not to be missed!

I am not really all that big on smoothies but when I came across the idea of using a creamy and tangy goat cheese in one, I was definitely intrigued! The recipe that I came across was one for a caramelized pear, chocolate and goat cheese smoothie on The healthy Foodie and the combination of flavours in the smoothie sounded out of this world! You start out by roasting some pears in the oven to caramelize them which concentrates their flavour. The roasted pears are then pureed into the base of the smoothie, some milk and Greek yogurt along with the goat cheese, some cocoa powder and cardamom. I also wanted to sweeten things up a bit so I added a touch of honey to the mix. I have to say that the goat cheese worked really well in the smoothie and the flavours played well with the sweet roasted pears and the chocolate. As I was enjoying the smoothie I could not help but think about how much I like the pear and blue cheese combo and I think I might try the blue cheese the next time that I make this smoothie just to see how it works. 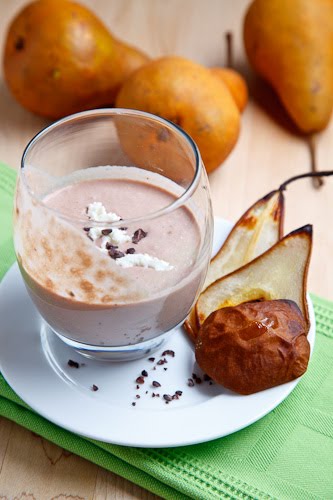 Sweet caramelized pear, chocolate and tangy goat cheese are a magical when combined in this smoothie that is not to be missed!