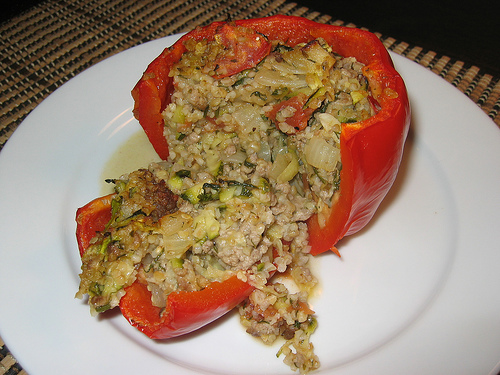 Stuffed peppers have been on my todo list for a while now. Luckily the farmers market was still full of red peppers on the weekend and I picked some up. I have been seeing stuffed pepper recipes on food blogs over the last few weeks and each one was different. Stuffed peppers are pretty versatile. You can stuff them with pretty much anything you want. Since I had all of the ingredients for the Greek Style Lamb Burgers from the other night I decided to go with a lamb stuffing with Greek flavours. Many of the stuffed pepper recipes that I saw included either rice or bread crumbs. I had been meaning to try bulgar for a while so I decided to use that instead of rice. The stuffed peppers turned out to be pretty tasty. I am really enjoying the flavourful lamb meat.
When looking at the recipe and photo now, I realize that there was no cheese in it. I think I might mix in some feta or sprinkle some pecorino on top the next time I make this.