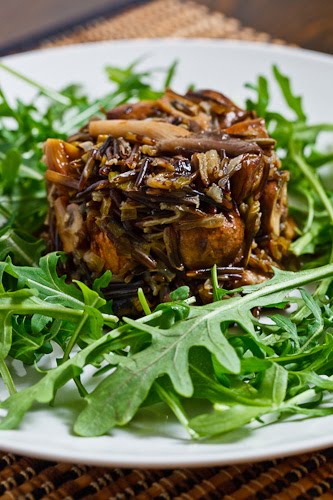 The other day when I was going through my pantry I came across some wild rice and I realized that it had been a while since I had done anything with wild rice. Thinking that, I just had to do something with it and I was thinking about a whole grain style salad. Although I had a few ideas, the one that I kept coming back to was a mushroom and wild rice salad that would also indulge my obsession with mushrooms. My normal starting place for mushrooms is to saute some onions, add garlic, then the mushrooms followed by a herb. Leeks had been on my mind recently and I wanted to change things up a bit so I replaced the onion with leeks and I figured that the green that the leeks brought would lighten the dish up a bit. For the herb I went with thyme which goes really well with the earthiness of the mushrooms. I often like to add nuts to a salad like this and I was going to go with walnuts but when I was at the store I noticed some chestnuts which would add a nice sweetness to the dish. The final component was a dressing and a balsamic vinaigrette was at the top of my list. I served the mushroom and leek wild rice salad on a bed of arugula and formed the salad using ramekins.