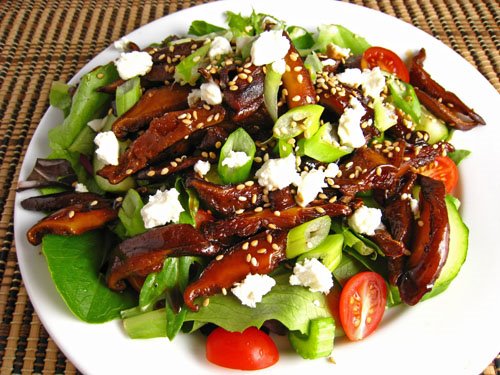 This months No Croutons Required theme was mushrooms . With mushrooms being one of my favorite foods there was no way that I could not participate. I was wondering what I would do. I have a few mushroom recipes bookmarked that would have been nice but I decided to wait a and think it over. A while later I came across a picture of a salad with sliced rare steak on top that looked really good. I thought that a salad with a sliced portobello mushroom on top would also be great. My next thought was I could do teriyaki mushrooms! Then I thought, wouldn’t this also be great with shiitake mushrooms?! Since I could not decide whether to use portabella mushrooms or shitake mushrooms I just did both.
Given that mushrooms soak up liquids quite well I decided that it was probably not such a good idea to marinate the mushroom in the teriyaki sauce like I would normally do for meat. I did not think that trying to cook the soggy mushrooms would be all that fun. I decided to saute the mushrooms in olive oil and add the teriyaki sauce when they were done cooking. I reduced the teriyaki sauce to thicken it a bit and poured it onto the salad in addition to the mushrooms so it in effect became a dressing for the salad. The teriyaki mushroom salads were both very good! The sweet and salty teriyaki mushrooms were absolutely amazing! The warm mushrooms started to melt the goat cheese spreading its creamy goodness around. The savoury goat cheese was a nice contrast to the sweet teriyaki sauce. The vegetables added a nice juicy freshness and tasted great in the teriyaki sauce dressing. I will definitely be making this again!