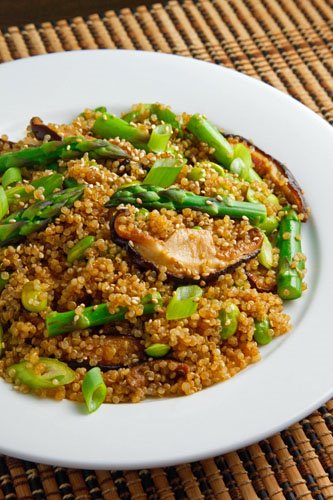 Since discovering quinoa it has quickly become one of my favorite grains. It is a very versatile grain and I like to use it in salads, soups and even as a porridge for breakfast. I am constantly looking for new ways of enjoying quinoa and I recently came across a teriyaki quinoa that sounded good. Homemade teriyaki sauce is one of my favorite flavours and I immediately jumped on the idea of combining it with quinoa. The teriyaki quinoa that I came across was more of a side dish with just the quinoa and the teriyaki sauce but I was thinking that it would go better as a more substantial salad. Given that teriyaki sauce is Japanese I was thinking about Japanese ingredients and the first thing that came to mind was some teriyaki shiitake mushrooms. Next up was some edamame for a bit of green and a healthy kick and since asparagus was still in season and I had it on hand I threw some in as well. I then garnished it with some toasted sesame seeds and sliced green onions. The one critical element that I find really makes Asian inspired dishes is the smell of sesame oil and I always like to add a bit just at the end so that the aroma is nice and fresh as the dish is served. The asparagus and shiitake mushroom teriyaki quinoa salad turned out really well! The quinoa salad was so light and with the teriyaki flavour it was amazing. The toasted sesame seeds added a nice crunch and along with the sesame oil they added another great layer of flavour. Overall this turned out to be a really nice light Summer meal.