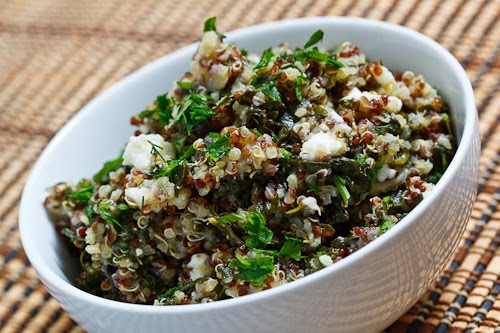 Although I generally like to plan my meals out for the week, sometimes things don’t work out as planned. At the end of this week I noticed that I had an extra bunch of spinach in my fridge that I had not used during the week and it now needed to be finished rather quickly. Luckily I had an idea of what to do with it; I had been thinking about using the spinach, feta and herb flavour combination in a quinoa salad and now was as good a time as any to try it. Well, perhaps not the best time, as I had envisioned making it with white quinoa and all that I had on hand was a mix of white and red quinoa, but that would not affect the flavour so I was good to go. This quinoa salad was pretty easy to make and once you had everything in the pot you can pretty much just sit back and wait for it to finish cooking. The spinach and feta flavour combination worked really well in the quinoa salad and the one thing that I liked the most, outside of the flavour, was how light and fresh the quinoa salad seemed. It is always nice when a last minute dish turns out so good!