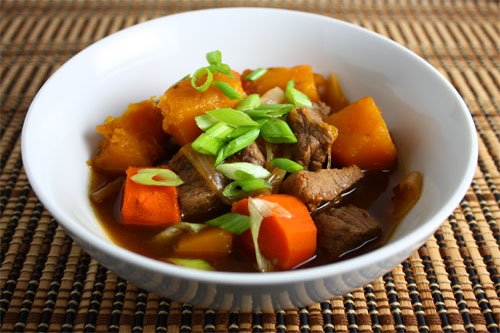 The weather certainly has gotten cooler as of late and I have been craving heartier meals. It recently came to my attention that I have not been doing much Japanese cooking lately and I was missing it. I decided to combine the two and make nikujaga or meat and potatoes. Nikujaga is a Japanese version of a beef stew that is simmered in the classic Japanese seasonings of soy, sugar, sake and mirin. The stew ends up with a really nice blend of sweet and salty which works surprising well. Nikujaga is easy to make and tasty and because of that I make it fairly often. Recently I seem to always have some extra pumpkin lying around that just screams “use me” so I decided to replace the potatoes with pumpkin this time. I garnished the nikujaga with some chopped green onions and some shichimi togarashi. Shichimi togarashi is a Japanese condiment that is made from a blend of chilies and other things like sesame seeds, nori, etc. I enjoyed the heat that the shichimi togarashi added to the nikujaga.
Notes: Nikujaga is often simmered until most of the liquid has evaporated but I prefer to have some liquid left. I prefer to use dashi as the liquid but I have also used beef stock or even just water.