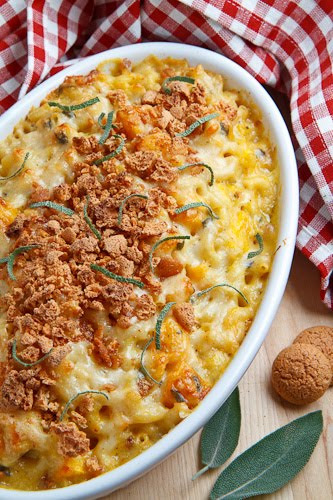 A creamy mac and cheese with roasted pumpkin, sage, plenty of cheese and an amaretti crumb topping.

With Halloween quickly approaching I have had pumpkins on my mind a lot! Pumpkin has to be one of my favourite ingredients at this time of year and there are just so many amazing dishes that can be made with it that it is sometimes difficult to decided which ones to go with. Do you go with a tried and true recipe like this pumpkin ravioli in sage and browned butter sauce or do you try something new? Speaking of the pumpkin ravioli, I recently came across the idea of adding crumbled amaretti cookies to it and I was immediately entranced by it! The ravioli is normally a savoury dish and I really liked the sound of adding the sweet and almond-y amaretti cookies to it and I knew that I would have to try the flavour combo out! I had also just been itching to try a pumpkin macaroni and cheese and I decided to combine the two ideas into one.
I could have gone one of two ways with the pumpkin mac n cheese by using either pumpkin puree or with roasted cubes of pumpkin. Since I liked the idea of nice big chunks of pumpkin in the mac and cheese I went that route, though I did end up mashing some of the roasted pumpkin cubes before mixing it into the pasta to get the best of both worlds. The base of macaroni and cheese is very often a bechamel sauce that the cheese is melted into. A bechamel sauce is made by cooking butter, mixing in some flour and then adding a liquid before letting it simmer until it thickens. The trick to a good bechamel sauce is to let the flour cook in the butter before adding the liquid and this helps to ensure that the sauce does not have a floury taste. Another thing that you can do to give your bechamel some extra flavour is to brown the butter before adding the flour and I took the opportunity to add a healthy amount of sage to the butter as it browned. Of course the most important part of macaroni and cheese is the cheese and this time I went with a combination of gruyere and fontina which are nice and melty and some parmigiano reggiano which is just full of flavour. Finally, I fit the amaretti cookie crumbs in by topping the mac and cheese with them.
This recipe is pretty straight forward and easy but it does require a bit of time as you have to roast the pumpkin and then bake the macaroni and cheese. I could barely contain myself through all of the roasting and the baking and then waiting for it too cool down seemed like an eternity but I was rewarded when I finally got to dig in. The pumpkin macaroni and cheese with amaretti crumb topping was and magnificent marriage of sweet and savoury! You really cannot go wrong with pasta covered in a melted cheese sauce and the almost sweet pumpkin went so well with all of that savoury cheese! The pumpkin and sage flavour combo was once again a complete winner and the crumbled amaretti cookies were indeed the highlight of the dish! I would say that the key to the amaretti cookies is to not use too much as it was really nice to hit small pockets of the crunchy sweet almond flavoured bits every once in a while. I will definitely be making this again and now I am looking forward to eating the leftovers for lunch this week!
Note: Any winter squash such as a butternut squash or kabocha would also work beautifully in this macaroni and cheese as a substitute for the pumpkin. 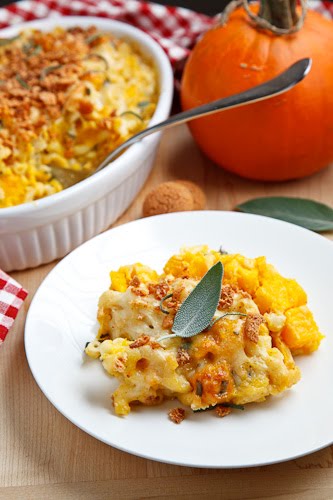 A creamy mac and cheese with roasted pumpkin, sage, plenty of cheese and an amaretti crumb topping.