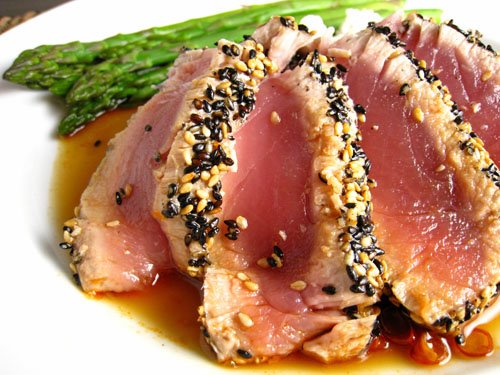 I had been seeing some really amazing photos of some barely seared tuna steaks around the blog sphere and I just had to try it. I like a nice barely seared beef steak and I was wondering what a tuna steak would be like. A few of the tuna steaks that I saw were crusted in sesame seeds which sounded pretty interesting. The tuna was really easy to make. You just crust the steak with sesame seeds and sear it for a few minutes on either side. You want to be careful not to over cook it as fully cooked tuna can be a bit dry. The seared tuna steak was really good. It was nice and moist and tender. The sesame seeds added a nice contrast in texture. I served the sesame crusted tuna on rice with some orange teriyaki sauce and some asparagus on the side.