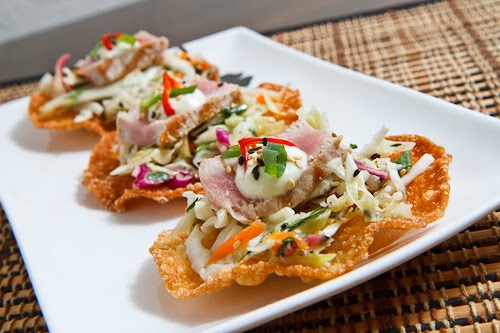 Almost a year ago now I attended the opening party for the restaurant Joey Don Mills here in Toronto. While I was there I saw their as of yet unfinished rooftop patio in addition to getting to sample lots of tasty food. Last week I had the opportunity to attend their long awaited rooftop patio opening party and I have to say, the patio looks great and the food was just as good as I remembered it. I got to sample a number of their dishes while I was there and the one that really caught my attention this time was one of their signature dishes, the ahi tuna tacos and I could not resist trying to recreate them at home.
The ahi tuna tacos are essentially bite sized tacos filled with a sesame and ginger coleslaw topped with a piece of perfectly seared ahi tuna served with a wasabi and lime aioli. The tacos shells are made from a crispy fried wontons and since I could not figure out how to fry them in the shape of a taco shell I ended up making tostadas rather than tacos. I was in luck for the the sesame and ginger coleslaw as I had recently made some and all I needed to do was tweak the recipe a bit to make a mayonnaise-less version. Next up was the wasabi and lime aioli and although aioli is pretty easy to make I was a little pressed for time so I made a really quick and easy version using mayonnaise as the based. With all of the ingredients present all that was left to do was to grill up the tuna and assemble everything. The key to the tuna is to sear it very briefly such that the middle is still nice and pink when you pull it off of the grill.
The ahi tuna tostadas turned out amazingly well! The fried wontons were nice and light and crispy and the sesame and ginger coleslaw was cool and tasty and brought a nice crunchy texture. The wasabi aioli had a mild wasabi flavour and just a hint of bite that did not threaten to overwhelm the delicate flavours of the tuna. With all of the Japanese flavours going on in these tostadas I could not help but try putting a Korean spin on things and I made half of them with a guchujang and lime aioli which was also really good. This dish may be a little decadent with the cost of tuna these days but it is definitely worth treating yourself every once in a while.
If you are interested you can take a look at some of the photos that I took at the party in my Joey Don Mills Patio Flickr Gallery . 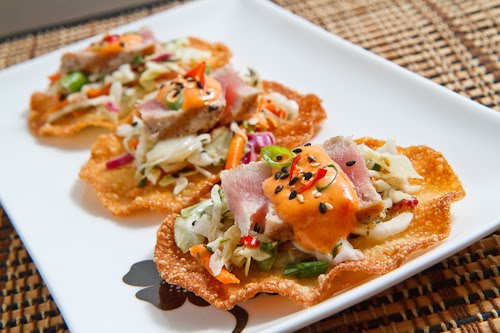