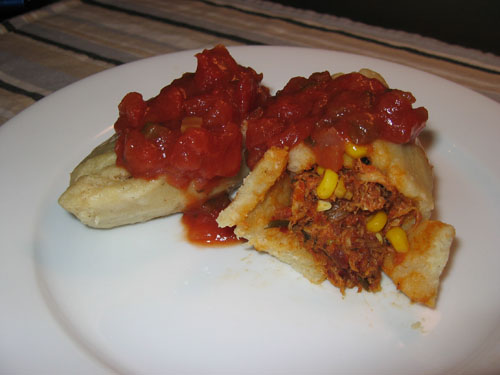 I first learned about tamales a few months ago. Tamales are steamed corn dough that is often filled with meat or other things. The tamales are usually wrapped in corn husks when they are steamed. When I came across the tamales corn was not in season so I bookmarked the page to come back to later. Now that corn is in season I got a chance to try them.
I decided to go with a shredded chicken filling and I though that I would add the corn from the cobs. So I used the corns husks in addition to their the kernels and I used a corn flour for the dough. The corn kernels added a nice sweetness to the heat of the shredded chicken. Of course one of my favorite herbs, cilantro was also in the shredded chicken mix. The tamales turned out pretty good. I topped them with some salsa. You could also have them with sour cream, cheese, etc.

Take a look at the Weekend Herb Blogging roundup at Thyme for Cooking.