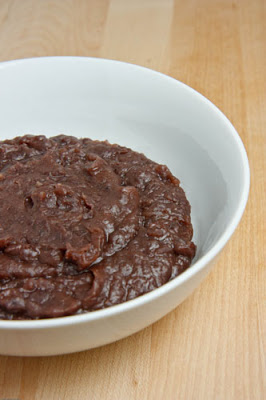 Sweet red bean paste is a common ingredient found in Japanese sweets. It is made by simmering azuki (red beans) in water along with a sweetener such as sugar or honey or maple syrup, etc. You should be able to find sweetened red bean paste in your local Asian grocery store. It can be a little difficult however as it has several different names. Common names include: an, anko and ogura. If that were not enough it can have different names based on the consistency of the red bean paste as follows:
Tsubuan – whole red beans simmered in water with a sweetener
Tsubushian – red beans simmered in water with a sweetener and then mashed
Koshian – red beans simmered in water with a sweetener and then mashed and then sieved for a nice smooth finish
If you cannot find it in stores it is easy enough to make your our. All you need is some azuki (sometimes called adzuki) beans, some water and a sweetener such as sugar. Regular grocery stores near me carry canned azuki beans which are easier to work with. If you can only find dried azuki beans then soak them over night and extend the simmering time until they are nice and tender.