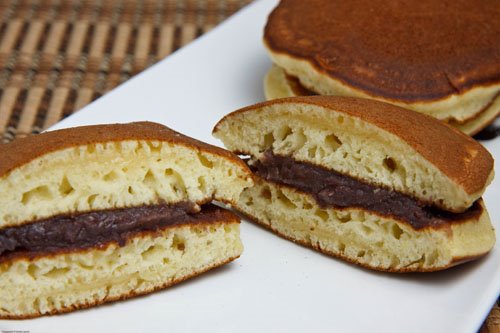 I recently realized that I have not been participating in many food blogging events lately and I resolved to fix that. One upcoming event that caught my attention was the My Legume Love Affair event being hosted by Coco Cooks and this months theme was starters and desserts. I immediately thought about Japanese sweets with red bean paste and there were a few that were on my list of things that I wanted to try. At the top of my list was dorayaki which are essentially a pancake sandwich filled with sweet red bean paste. You should be able to find the sweet red bean paste at your local Asian grocery store or you can make your own red bean paste and it is pretty easy. The dorayaki are pretty simple to make as well. It is just a matter of making some pancakes and then sticking them together with the red bean paste in the middle. The dorayaki turned out really well! I don’t know what it is about sweet red bean paste but I like it a lot and it went really well sandwiched between these pancakes. I also liked this pancake recipe as they came out nice and light and fluffy and perfectly golden brown.