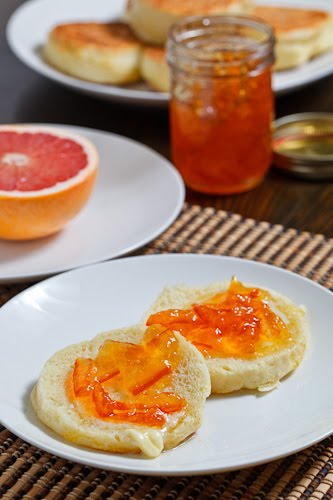 What better way to try out my new marmalade , than on some fresh homemade English muffins ? I had been wanting to try making my own English muffins for a while and now was the perfect time! After looking at a few recipes I ended up going with Alton Brown’s recipe for English muffins which sounded pretty straight forward. What struck me the most about English muffin recipes is that despite the fact that they use yeast as the leavening agent, they are like a batter and not a dough, not unlike a pancake batter. To prevent the batter from spreading out all over the place metal rings are placed in the pan and the batter is poured into them so that when they expend, they expand upwards in the circular shape.
English muffins are pretty easy to make and the rewards are well worth the effort to make them yourself! They end up nice and golden brown on the outside and light and fluffy on the inside. When they are fresh from the pan and still warm it is really hard to resist cracking them open right away, topping them with butter and waiting for it to melt and get sucked into all of the nooks and crannies. Once the butter has melted, you add some marmalade and then its like having heaven for breakfast. When you first bite into it you get the slightly crisp outside along with the sweet and tart marmalade and then you hit the warm, soft and buttery inside which just dances in you mouth.
The English muffins will keep well in a sealed container for a few days. Although they are best just the way they are when they are first made, on the days following I like to toast the insides after slicing them open which adds a nice extra bit of crunch.